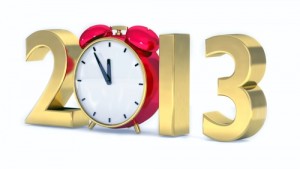 2012 was the year of accelerators, crowd funding and the Series A bubble. Venture funds contracted, the big got bigger and the solo GPs bookended  the early stage VC market. And the IRR continues to improve. Lets start with performance – why be ashamed, after all?

Fund Raising – The smart become smarter, the big become bigger: Preqin data shows that the divergence between the top-quartile IRR and the ROW (rest of the world) continues to grow. Preqin reports that top quartile IRR is in the 20+% range while the bottom most quartile in well, -10% or more. 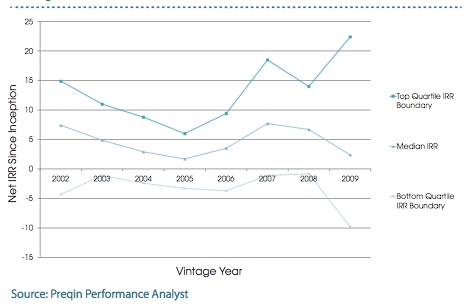 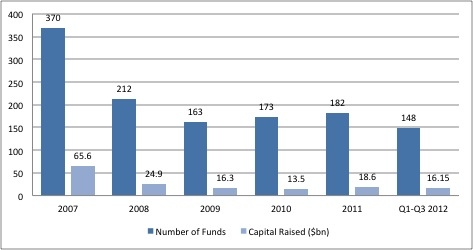 Yet as much as 60% of all LP capital was locked up by the top 20 VC funds, according to Preqin. Sequoia V raised $950 million and NEA 14 raised $524 million. The Foundry Group decided to stay at their $225 million comfort level and debuted the worlds first “cut and paste” fund. The rest of the world, which includes as many as 130+ funds have to work harder. Call it capital concentration, consolidation or Darwin at work – its all the same. Overheard on Sand Hill Road – “Marc Andreessen thinks software is eating the world. I think A16Z is eating the rest of us VCs.” Ouch!

Within the asset classes, buy-out is seen to gain momentum in 2013, but VC is a close second. 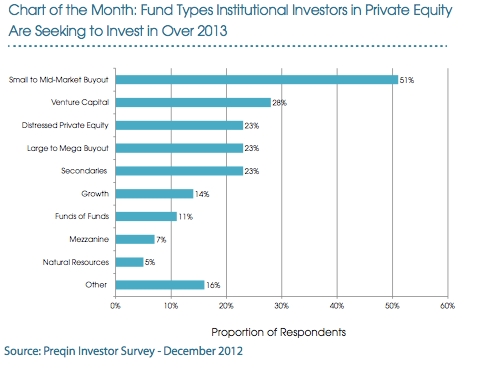 Even the fund-of-funds model is going through consolidation. After all, why should LPs pay a double layer of fees when the asset class has much noise, and has largely underperformed. In 2011, StepStone acquired Parish Capital. In 2012, Credit Suisse CFIG (Customized Fund Investment Group) is up for sale. Meanwhile, focused FoFs with clear LP and GP value propositions gain momentum with Renaissance and Cintrifuse. And Michael Kim of Cendana Capital fund-of-funds may be the only Solo LP we know who has a corner on the Solo GP hyper-local VC market.

Sectors and Stages: According to NVCA data, $19.9 billion has been invested in 2661 deals as of Q3 2012.  As much as 50.7% of all this capital went in seed and early stage deals. The largest sector to attract capital, by far, was software at 32% followed by biotech at 12%. VCs and presidential debates ignored cleantech which attracted only 6.5% of all capital. So much for global warming. Its more like VC cool-off.

The accelerator bubble may have launched a thousand software startups, all at a flat price of 6% and $100,000 cash investment. But the Series A pressures remain. VCs hold back and are not enthusiastic to invest at $20 million pre-money valuations. At this rate, the accelerators need to look at the capital supply chain and ask themselves –  are we producing goods that no one wants to buy? Supply versus Demand ? Quantity over Quality ? Or have we buried our head in the sand on educating entrepreneurs on pricing? 2013 will see an increased mortality rate and a correction – all for the good, hopefully. In the meantime, entrepreneurs may have to look into the 138 crowd-funding websites as an option to their Series A. And, no, I am not making that number up. Time Magazine reported it in October 2012.

Exits: (Two words: Facebook Debacle) Yet if we get past the IPO debacle of the year, we find data thats refreshing. 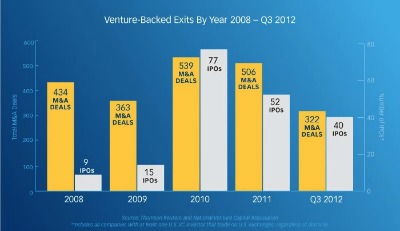 While M&A numbers (of deals with disclosed values) dropped (140 versus 88), the average deal size increased (from $142m to $192m).  Nicira, Yammer and Instagram were $1bn+ exits and software sector dominated overall exit value creation. IPOs saw a similar pattern where number of offerings dropped yet offering sizes increased almost 2.5X, up from $208 million last year to $497 million in 2012.

The final word: SuperAngel Ron Conway donated 10X more to Obama / Democrats in 2012 than he did to Romney. Need further proof of his ability to pick winners?

Mahendra Ramsinghani is the author of “The Business of Venture Capital” (Wiley Finance, 2011) and as a VC aspires to get better or go home. Odds are more on the latter. Opinions expressed here are entirely his own.