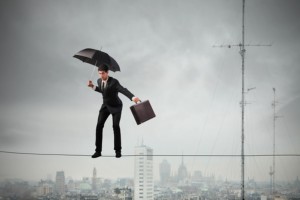 Vista Equity Partners has worked in an unusual clause in its contracts with private equity fund investors that gives it more financing flexibility and a leg up in leveraged buyouts, but also carries more risks for it and its investors, according to people familiar with the matter.

The agreement allows Vista to temporarily finance large corporate buyouts just with the cash from its $5.8 billion fund, as against using both debt and equity to buy companies. Under the right circumstances, this flexibility allows Vista to be nimble in auctions and secure the best possible debt financing after it has clinched a deal.

Two months ago, Vista used the clause in one of the largest private equity deals of the year, committing to fund the $4.2 billion takeover of TIBCO Software Inc with equity. One day later, it secured debt commitments from JPMorgan Chase & Co and Jefferies LLC for the deal, reducing its equity exposure to $1.6 billion.

The maneuver helped it not only outbid rival Thoma Bravo LLC in the TIBCO auction, but also use JPMorgan and Jefferies, which where were originally backing Thoma Bravo during the auction and were offering better financing terms, the sources said.

Investors in the Vista fund, known as limited partners, include some of the largest U.S. public pension funds, including the New Jersey State Investment Council and the Oregon Public Employees Retirement Fund. These funds do not disclose to their members and retirees all the risks they undertake, because the agreements with Vista and other private equity firms are confidential. The revelations highlight how important aspects of the investment of public money in private equity are shrouded in secrecy.

Public pension funds have invested more money in buyout funds in recent years in a search for yield amid persistently low interest rates. Private equity accounts for 9.4 percent of total public pension fund investments and has delivered a 12.3 percent annualized return to the median public pension over the last 10 years, more than any other asset class, according to the Private Equity Growth Capital Council, the industry’s lobby group.

Several pension fund investors, private equity placement agents and lawyers interviewed by Reuters said Vista’s terms are highly atypical and not widely known even within the private equity industry. Most firms have caps – usually around 15 to 20 percent of the fund – on how much equity they can commit to a particular deal. Private equity funds also rarely make all-equity commitments for such deals, preferring to tie up debt financing ahead of time. When they do make such all-equity commitments, the equity checks tend to be much smaller.

The reason is that doing so poses the risk that investors see their entire capital tied up in one investment, potentially hurting returns and denying them the benefits of diversification, these industry sources said.

Such a situation can arise, for example, if the debt market conditions were to suddenly sour, as it happened in the summer of 2007 before the financial crisis. In the TIBCO deal, Vista’s financial liabilities are capped at $275.8 million. But if the banks walk away before the deal closes, TIBCO can try to force Vista to close on the deal with its fund.

“It’s a bit like walking on a wire without a net,” said Alan Klein, a partner at law firm Simpson Thacher & Bartlett LLP.

The sources said that Vista believed it wasn’t taking any risk because it already had more than $2.4 billion in debt offers from banks when it made its equity commitment for TIBCO. Vista is also extremely confident in its track record, the sources said.

The firm is ranked ninth among the most consistently performing private equity fund managers by market research firm Preqin.

But two pension fund investors who spoke on the condition of anonymity were surprised when they were told that Vista had temporarily committed most of the fund’s equity in the TIBCO deal. These investors and other industry sources said some Vista investors may not have paid attention to either the arrangement or its implications in what is typically a very lengthy and complex contract.

“To me, that is taking an awful lot of risk,” said Kelly DePonte, managing director at advisory firm Probitas Partners LP. “This would be an area of concern that I would raise for the limited partner to look at.”

Most private equity funds have a so-called “bridging” provision in their agreements with investors that allows the managers to spend an additional 5 percent to 10 percent of the fund on the basis they can syndicate that commitment in 12 to 18 months.

Vista’s latest fund, Vista Equity Partners Fund V, has an uncapped bridging provision, according to a limited partner agreement excerpt seen by Reuters and the sources.

That provision allows Vista to commit as much of its $5.8 billion fund into one deal as it wants. It then has 18 months to reduce the fund’s exposure to a 20 percent threshold. Capital that is above that threshold at the end of the 18 months becomes permanent capital of the fund, according to the limited partner agreement.

Vista was initially working with Bank of America Merrill Lynch and Deutsche Bank AG, but it held out signing up those banks because it was looking for more aggressive financing terms, the sources said.

JPMorgan and Jefferies have offered Vista debt equivalent to about 11 times TIBCO’s 12-month earnings before interest, tax, depreciation and amortization to the end of September, which Moody’s Investors Service Inc called “very high.”