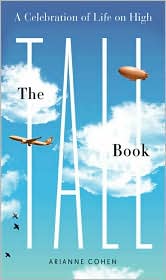 Brooklyn-based journalist Ari Cohen recently published a book called, “The Tall Book: A Celebration of Life from on High.” Cohen knows a little about living in the clouds, having been a 5’3” eight-year-old who grew into the 6’ 3” adult she is today. But she also conducted some extensive research for her book that she argues, persuasively, gives tall people an advantage in the workplace (as well as elsewhere).

A couple of interesting Q&As have been been published about the book, including, today, by Fortune. It reminded me of some of the data points about which Cohen has been talking lately, and that I (5’ 9”) have personally found most intriguing.

* Tall people make an average of $789 per inch per year (for every inch above a person of average height), according to 50 years of salary surveys.

* According to numerous studies, when an employer is given the real and fictitious resume of two similarly competent employees, the tall employee will be chosen for the job 70 percent of the time.

* When friends talk, they do so at an average distance of 18 inches apart. When an employee talks with his or her boss, they typically stand four feet apart. When a tall person talks with anyone, he or she is given four feet.

* Over the last century, the average American president has measured in at 6’1”.

* Tall men are also the most successful dating population on earth, says Cohen. In an interview with Maclean’s magazine, she says that in her research, she found that most heterosexual people date within an 8 percent height difference, which she says is roughly five inches. “Tall men are the only ones who don’t do this,” she adds. “Tall men date whoever the hell they want.”