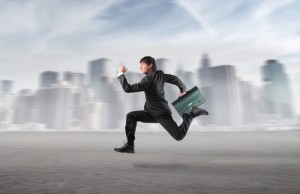 In the private equity world, how fast is fast?

“We are very pleased with the value Water Street has built in its group of health care companies, and the strong results its team has achieved over the past six years,” said Brian Welker, Allianz Capital Partners’ investment director, in a statement.

Water Street wouldn’t name any of its LPs (except for Allianz) but said investors included domestic and international pension funds, endowments and financial institutions. We’re hearing LPs in fund III include Adams Street Partners, Goldman Sachs and New York Life. Many investors, like Allianz, have been with Water Street since its first fund in 2006.

Water Street did not use a placement agent. Fund III also collected about 15% more than its prior fund, Water Street Healthcare Partners II LP, which closed at $650 million in 2008. A net IRR for fund II wasn’t available but the pool had an investment multiple of 1.64x, according to Sept. 30 data from the University of California Regents. Water Street’s first fund, which raised $370 million in 2006 has a net IRR of 9.7%, University of California Regents says.

In May, peHUB reported that Water Street was expected to come to market for its third fund. Water Street’s third pool was so hot LPs were calling to get in, peHUB said at the time. Water Street did end up turning away some potential investors and only allowed a “handful” of new LPs into the fund, the source says. However, these investors were LPs who started building relationships with Water Street several years ago, the person says. Fund III ended up collecting $100 more than its $650 million target.

Water Street’s quick fundraise is the exception in the current fundraising market. Many firms are spending roughly 18 months or more to raise their fund. But some firms are quite fast. Berkshire Partners, last year, spent about four months marketing for their most recent pool which clocked in at $4.5 billion. “Water Street has built an impressive institutional organization going into their third fund,” an LP says.