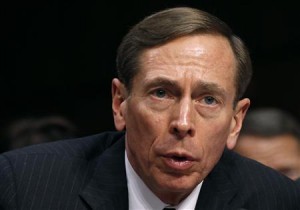 It’s been nearly a week since David Petraeus resigned as head of the Central Intelligence Agency. Since then, the four-star general, who served the country for more than 37 years, has effectively been declared persona non grata for having an affair with his biographer. He’s even being shunned as a prospective candidate for president of his alma mater, Princeton University, a job that was only rumored to interest him.

“Princeton is a world-class institution, and we only want the best representation at the presidential level,” said university staff member Bob Callahan to the Daily Princetonian this week.

It all seems like pretty shoddy treatment for a man who led his country through two wars in Iraq and Afghanistan, respectively. As Pulitzer Prize-winning military writer Tom Ricks observed to NPR yesterday, Petraeus “gave so generously to the country of his time, and his family has made such sacrifices,” yet in their time of need, we’ve returned the favor by “dragging him through the mud nationally.”

But it’s not just shoddy; it’s knuckle-headed. Let’s remember that Petraeus isn’t just a proven general who has led tens of thousands of soldiers; he’s a man who revolutionized his profession. Petraeus literally wrote the book on counter-insurgency, and he wasn’t afraid to think differently in a culture more known for conformity than confrontation.

Maybe the CIA’s loss will be the investment world’s gain. The Carlyle Group — which has never shied from high-profile hires — could surely benefit from bringing on board someone with Petraeus’ leadership skills and star power. As the Boston Globe discovered in a 2008 investigation into three- and four-star generals who join the private sector upon retirement: “When a general-turned-businessman arrives at the Pentagon, he is often treated with extraordinary deference — as if still in uniform — which can greatly increase his effectiveness as a rainmaker for industry.”

Petreaus would also bring considerable cachet to the right venture capital firm – a path that has already been paved by the likes of former Vice President Al Gore, who joined Kleiner Perkins Caufield & Byers as an investment partner in 2007 and who has enjoyed a mutually beneficial and likely lucrative relationship with the firm ever since.

And if I were on the board of Palantir Technologies, one of Silicon Valley’s hottest defense startups, I’d definitely be calling Petraeus right about now. The CIA has reportedly used Palantir’s data-combing technology to uncover bombing networks in Syria, Afghanistan, and Pakistan, among other things, and given Petraeus’ knowledge and experience, he could undoubtedly unearth new defense opportunities.

That’s saying nothing of what Petraeus could do to raise Palantir’s profile for a possible IPO. Though the company has raised $301 million over its eight-year history, it’s not exactly well-known by retail investors; hiring Petraeus would give it much-needed name recognition.

The risk, of course, is that Petraeus might not fit in. But private equity and VC pros who make their money by spotting underappreciated assets would be wise to consider taking a flyer on him. While the scandal could scare off some firms, the general’s leadership skills, vision, and connections should make him an awfully tempting takeover target.