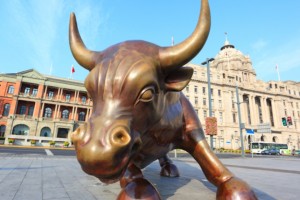 KKR Financial shares jumped 30 percent to $12.34 on Tuesday afternoon, one day after private equity firm KKR & Co LP said it had agreed to buy the company in a $2.6 billion deal.

KKR Financial attracted unusual call option buying on Nov. 13 on volume that was above the few hundred contracts that typically trade on a daily basis on the stock, according to options analytics firm Trade Alert.

Owners of equity call options, contracts that convey the right to purchase the company’s shares at a fixed price by a certain date, benefit because as the stock rises, the value of the call option goes up.

Call volume on Nov. 13 was 43 times normal, with a total of 13,000 contracts changing hands. Trade Alert President Henry Schwartz said 91 percent of that volume was in the April 2014 $10 strike calls which traded 11,844 times on that day.

Nearly 9,600 of those contracts were bought for an average price of 20 cents per contract. Clearing data on Nov. 14 showed that 5,349 contracts in the April $10 strike were new positions, Schwartz said. The stock, which had been fallen more than 13 percent over the previous three weeks, closed at $9.60 on Nov. 13.

Schwartz said some of these call positions were apparently closed out on Tuesday at $2 per contract, a 900 percent paper profit.

“These call purchases look suspicious because they are well-timed and they are above the normal amount of trading. It was a multi-year record for out-of-the money call activity,” Schwartz said.

The trader will obviously net a huge profit, Keene said. The trader invested around $82,500 in these calls and the position is now worth over $1.15 million.

It can be hard to pin down whether unusual trading in a company’s options stems from sources who had knowledge of the news or is just innocuous speculation.

The U.S. Securities and Exchange Commission, which looks into unusual share and options activity, declined to comment.

In 2006, the U.S. options exchanges set up the Options Regulatory Surveillance Authority, ORSA, an entity to collaborate on insider trading surveillance and investigations.

A spokeswoman for the Chicago Board Options Exchange, which coordinates efforts for ORSA, said: “CBOE takes its regulatory responsibility very seriously and does investigate unusual trading activity, however, we do not comment on individual investigations.”

A spokeswoman for KKR and KKR Financial declined to comment.

Two studies done for Reuters found there were numerous examples of unusually heavy options trading prior to market-moving news.