PE Hub
Home Scoops & Analysis What does private equity wish for in 2015?
Uncategorised 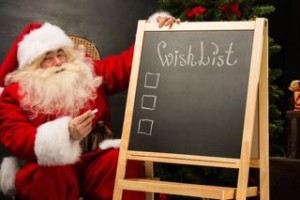 An end to regulatory insanity, less volatility in the broad market and a holiday moratorium on business email are just some of the things our private equity readers are wishing for this year.

Several sources hoped the major indices would continue rising in 2015. “I wish the public markets would hold up because the major indices feel pretty fully price,” one LP said. “I want them to just hold up so we can get some companies out of our existing portfolio. And I’d like to see oil at triple digits again. That would be nice.”

Another LP wished that the U.S. in 2015 would recognize the coming pension crisis. This source wants the U.S. take a cue from countries like Chile and Argentina and “create another leg to the stool so Americans will get a pseudo ‘defined benefit pension’ system,'” the second LP said.

“Except for the rich and smart the 401(k) should be declared a failure and the fastest way for the middle class to become destitute in old age,” the second LP said.

Several sources complained about regulators and called for an end to rules regarding registration, disclosure and compliance. “It’s negatively impacting fundraising, particularly for smaller funds,” one placement agent said.

A second placement source said they were “hopeful for regulatory sanity.” The source wants “proper focus” this year from regulators and “not friction for the sake of it or politics. That yields a better industry and market.”

This year saw much domestic friction between U.S. citizens and police. International terrorism also took a terrifying twist with the advent of ISIS. “There’s so much pain and suffering in this world which is caused by hate and fear,” a VC said. “I wish for improvement there.”

And some GPs just want the simple things in life. This private equity executives wants “more and larger LPs, a stronger portfolio, and new deals for cheap. Oh, and stronger oil prices, since we have several energy companies in the portfolio.”

“I’d like all e-mail service for wireless devices to shut off from noon on Dec. 24 through midnight on Jan. 4, that way people can truly decompress and focus on their families,” a second PE exec added.