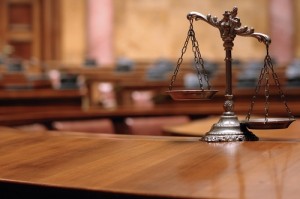 Tomorrow morning, a judge will decide whether or not the battle between venture capitalist Ellen Pao and her employer, Kleiner Perkins, will play out in court or behind the closed doors of an arbitrator.

It doesn’t look good for Kleiner, which is pushing for arbitration. According to our Reuters colleague Daniel Levine, the San Francisco-based judge, Harold Kahn, denied Kleiner’s request in a brief order just now. “There is no arbitration agreement between plaintiff and defendant,” the judge wrote.

Judge Kahn, whose brief is intended to provide both sides’ attorneys insight into his current thinking, has had plenty of documents to pore over in recent weeks.

In addition to Pao’s lawsuit against the firm and Kleiner’s legal answer, he is basing his decision on several subsequent filings, most notably Kleiner’s motion to compel arbitration. In it, the firm argues that Pao can’t force a trial, having agreed to numerous arbitration provisions in several written contracts that state: “Any controversy or claim arising out of or relating to” the agreements “shall be settled by arbitration.”

As we observed several weeks ago, Kleiner’s argument was far from rock solid according to legal experts, who noted that the arbitration agreements that Pao signed relate to the firm’s agreements with limited partners, not an employment agreement with the firm.

In fact, two weeks later, on June 26, Pao’s attorneys filed an “opposition to motion to compel arbitration” on that basis, stating — in italics no less — that “there is no arbitration agreement between Ms. Pao and her employer,” and that “Ms. Pao is not employed by the Managing LLCs.”

It also argued that “no payments from the Managing LLCs are wages” and that “in fact, Defendant pays Ms. Pao salary and bonuses.”

Judge Kahn is also weighing a separate “declaration in support” of Pao’s opposition to being forced into arbitration, in which she paints a picture of someone bullied by Kleiner after complaining of harassment in 2007. Here’s part of that 12-page letter:

After four years of employment, I began to receive requests to sign Member Interest Letters for the KPCB XIII Associates and KPCB GGF Associates funds. These requests occurred after I had made several complaints of sexual harassment and retaliation, including multiple times in the summer of 2007, which complaints were acknowledged in emails by Ray Lane and John Doerr to me in July 2007, on December 7, 2007 in an email by me to John Doerr and Ted Schlein, and on May 6, 2008 in an email by me to John Doerr. The Member Interest Letters specified requirements for receiving carry in the funds. Although the Member Interest Letters required me to agree to be governed by the terms of the Managing LLC documents and to agree that I had been given a copy of those documents, those documents were not attached or provided.

Pao continues on to say that she tried crossing out the non-disparagement sections but was forced to reinstate and sign them. She says she was told by Kleiner’s “then outside counsel” that the “non-disparagement clause was not illegal and that the carve out for complying with a law/legal process satisfies any statutory obligations for whistleblowing and the like (though even that wouldn’t need to be spelled out in the agreement.)”

Last  Monday, Kleiner responded to Pao’s declaration, and you can quickly get a feel for its tone by reading the first two sentences of the document.  “A deal’s a deal,” it starts. “Especially when agreed to by a Harvard and Cravath Swaine & Moore trained lawyer represented by outside counsel” or Pao, in other words.

Kleiner’s response goes on to argue that “Pao’s claims are clearly ‘intimately founded in and intertwined’ with the Agreements; in fact, they are wholly dependent on them.” Ultimately, says Kleiner, “Pao seeks increased carried interest governed by the Agreements, but wishes to avoid their arbitration provisions. She cannot have it both ways.”

Or maybe she can. Stay tuned.