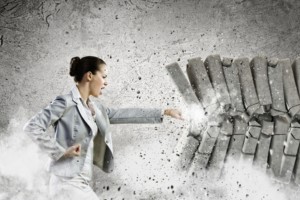 Lisa Calhoun, founder of Valor Ventures, walked about 30 blocks through 90-degree heat in mid-town Manhattan to meet me and explain the opportunity she sees in the venture world’s gender imbalance.

Calhoun was on a tour of New York City for a few days in August, shopping the debut fund of her Atlanta-based firm Valor Ventures. The fund, called V.1, is targeted to raise $50 million to make Series A investments in startups with at least one woman in the founder group. Since women have much tougher time getting funded than men, there is a huge, untapped market among female-led startups that Valor Ventures intends to access.

“Rather than say, ‘This is a big problem,’ the way to look at it is, it’s a huge opportunity for venture to use diversity to create ever more exceptional returns,” Calhoun said during our interview, after she catches her breath.

The funding gap looks like this: Of the $48 billion in venture funding in last year, only about 7 percent went to startups with female founders, according to Calhoun’s research that incorporates data from several studies, including one from Stanford University.

Meanwhile, one out of five startups looking for venture funding has a female founder, according to Valor’s website.

The imbalance edges toward the absurd. A study last year published in the Proceedings of the National Academy of Science found venture capitalists, the far majority of which are male, prefer to fund good-looking men over women.

Some might say this is a huge problem. Calhoun takes a sanguine approach:

“Every venture capitalist has that quest for the next big thing. This is that quest, I’m just not fishing in the same pond,” Calhoun said.

The fund will target fintech, healthcare, consumer and media sectors, or investments “at the intersection of technology, mobility and lifestyle,” Calhoun said.

Valor’s minimum investment will be about $1 million, and the firm plans to make use of venture debt as well as equity, according to a fund presentation.

The firm already has raised 10 percent of the target, Calhoun said.

“We’re finding a scary positive reception from investors who are familiar with the market and have actual experience with entrepreneurs and know the value they bring to the table,” she said. “That said, I’m totally willing to admit [the strategy] can be challenging and not for every investor.”

At a time when the venture industry is being criticized for being male-dominated, Valor joins a number of female-led venture firms that have launched in recent years, including Aligned Partners, Aspect Ventures, Cowboy Ventures, Forerunner Ventures and Illuminate Ventures (the latter of which is targeting to raise $30 million for its second fund).

Calhoun has to face the same challenge that every first-time group has: convincing LPs to invest. And this is made tougher with an investment thesis that is narrowed by certain parameters like gender. Most investors are conservative. They want to see experience and strong past performance.

“As a fiduciary, it’s hard to seek objectives other than maximizing your clients’ capital,” said one LP who has worked on building an allocation to diversity-related private equity and venture capital funds.

Calhoun touts Valor’s bench. The firm has several professionals who make up the investment team: “While the partnership is a new opportunity … there’s a lot of experience and grey hair on the team,” Calhoun said.

Calhoun, general partner, is an entrepreneur who founded PR agency Write2Market. She said she has coached almost 100 tech startups to create liquidity events, according to Valor’s website.

Partner Sarah Cooper O’Brien was the former CFO of a division of Carestream Health. She also spent time at GE Corporate Finance working on acquisitions.

Lindsay Trinkle, director, worked as program director at Atlanta Ventures, where she sourced the Yik Yak investment, which generated a 600x return, according to Valor’s website.

Strong performance is exactly what Calhoun expects out of the startups she backs. She uses this example of the kind of performance women-backed startups can achieve. First Round Capital, in a recent analysis of its 10 years of existence, found that out of its portfolio of 300 companies, those companies with a female founder performed 63 percent better than investments with all-male founding teams.

“If you look at First Round’s top 10 investments of all time based on value created for investors, three of those teams have at least one female founder,” according to First Round’s report.

“There’s a lot of early evidence that having a diversified team does drive better returns,” Calhoun said.

Valor is already building a deal pipeline. As we sit in the air conditioned luxury of a mid-town Starbucks, Calhoun provides more numbers. “One out of every five companies looking for venture capital today has a female founder on the team. You’re talking about roughly 20 percent of the market that venture has in front of it on a national basis.”

It’s a huge opportunity, but first Calhoun and her team need to get more investors on board. She’ll likely be walking many more blocks in cities around the country courting LPs before she can truly stop and rest.

“I think you have new worlds of innovation to discover right here in the U.S. and that excites me,” she said.