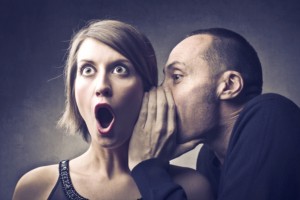 Some VCs have questioned the morality of anonymous apps. Without mentioning Whisper by name, Marc Andreessen tweeted in March that anonymous apps can “encourage negative behavior, tearing people down, making fellow souls sad.” VC Mark Suster was even more blunt, tweeting: “I deleted Secret after a week. I loathe reading hateful, hurtful, misogynistic, gossipy BS (I added to defend myself then deleted again).”

At yesterday’s TechCrunch Disrupt NY 2014 conference, Heyward insisted that Secret was a place for people without a voice — a soldier suffering from post traumatic stress syndrome, for example — to get their message out. At one point, he mused about a future world in which everyone is open with each other and a service like Whisper is no longer needed.

“We’re so intimately connected to each other, nothing is taboo, nothing is weird,” Heyward said, describing his utopian vision.

Heyward responded that Paltrow was a public figure, and Whisper information about public figures, as long as it is true, is fair game. Whisper doesn’t allow the use of proper names unless it is for people it considers to be in the public eye.

“This is information that belongs to the public,” Heyward said. “We have a responsibility to make sure this stuff is actually true [so] we’re not arming the public and our users with rumors, lies and gossip.

Roelof Botha, a partner at Sequoia Capital, which has invested in Whisper, told the audience that the service can be an important platform for whistleblowers. But his defense of the value of Whisper seemed half-hearted as Arrington continued to tear into Heyward.

“We’re not TMZ,” Heyward insisted, which elicited laughter from some members of the audience.