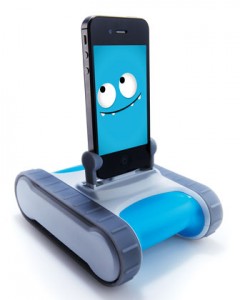 Over the past year, much has been written about how popular crowdfunding sites like Kickstarter may displace VCs. But it turns out Kickstarter could be taking on Amazon, too.

Its first customer toward that end? Romotive, a robotics company that raised money on Kickstarter last November to finish developing a prototype, and which is returning to the platform this week to sell a store-ready product. Kickstarter, which recently published a blog post titled, “Kickstarter is Not a Store,” declined to answer related questions for this story.

According to Keller Rinaudo, the company’s 25-year-old CEO and cofounder, Romotive’s decision to use Kickstarter as a retail channel originated in part from the unique degree of support that Kickstarter’s audience lends to new products.

Romotive’s story began last fall at the TechStars Seattle accelerator program, where Rinaudo and his two cofounders first developed the “Romo,” a small contraption that can transport an iPhone around a room, using another iPhone or iPad as its remote control. Users can either stream their picture onto the moving phone or project a cartoon-like face whose expressions can be altered to make it grumble or laugh.

Early adopters are already using the robots to play with their pets while at work and check up on kids in remote rooms, among other things. “It’s a great way to use old iPods and iPhones that people have begun to collect over time,” explains Rinaudo.

But when Rinaudo first looked for backing, investors didn’t get it. In fact, Rinaudo says Romotive was the only one in its TechStars class that didn’t receive funding by the program’s “demo day.”

Everything changed thanks to a 45-day Kickstarter campaign that the company was running concurrently. Indeed, shortly after 1,300 backers provided the team with $115,00 in just 45 days on the site, Romotive snapped up $1.5 million from a number of high-profile funding sources, including Stanford University, and Zappos’ CEO Tony Hsieh.

Sitting with Rinaudo and others of Romotive’s 18 employees — who live, work, and eat meals together in numerous, muggy high-rise apartments in a downtown Las Vegas building — Rinaudo tells me of the “two weeks of overnighters” spent assembling the robots last December in order to make Romotive’s original Kickstarter deadline. Among the nightmarish, if expectable, glitches the company confronted were circuit boards made the wrong way in China and Europe-based customers whose products wouldn’t work even after the circuit board problem was fixed. (Phones in Europe are volume-limited to 80 percent of their potential, “and we were going through the audio jack, so that broke the f***ng robot,” says Rinaudo.)

Today, the company is introducing a sleek new version of Romo that retails for $150 and looks as professional as anything that Apple might release. Rinaudo credits the headway to his close-knit team, but he also points to a carefully cultivated relationship with the same manufacturing center in China that produces 10 million Roomba vacuums each year.

Either way, people are beginning to notice. Neiman Marcus is already selling the robots as a toy in its Christmas catalog, with other major retailers coming online shortly. And Sequoia Capital just led a $5 million Series A in the company, which should allow it to create follow-on products, including what the company suggests will be a “female” version of the device called Julia.

Yet Romotive is also turning for a second time to Kickstarter, where it began selling the Romo again today. Though Romotive is asking for $100,000, Rinaudo seems to believe demand for its robots could reach into the millions of dollars. And he says that if that happens, because Romotive is now positioned to manufacture 12,000 Romo robots a week, “We’re ready.”

The question is whether Kickstarter is ready. The company has publicly stated that it does not want to be a retail channel and limits teams to offering “rewards” to their donors in what Kickstarter calls “single quantities or a sensible set.” But it’s easy to imagine other companies following in Romotive’s footsteps. After all, when a project is successfully funded, Kickstarter applies a 5 percent fee to the money collected, revenue that could add up quickly with customers like Romotive. The appeal to entrepreneurs is undeniable, too.

Explains Rinaudo: “If someone buys something at Neiman Marcus and it doesn’t work out of the box, they’re like, ‘F**k it, we’re returning it. And that can destroy a company’s relationship with that retailer, possibly forever.”

On Kickstarter, meanwhile, the people who pledge money to a company “want to be a part of the process,” he notes. “You’ll never find customers like theirs anywhere else.”

Romotive hopes Kickstarter donors might eventually contribute new features to its Romo app, for example. Rinaudo also points to the debacle in Europe. “When our robots arrived broken, because [our donors had] seen us building and shipping the robots in our updates on Kickstarter,” they weren’t irate. “It was more a mystery of ‘How do we make this work?’”

Photo: Image of the Romo robot courtesy of Romotive.