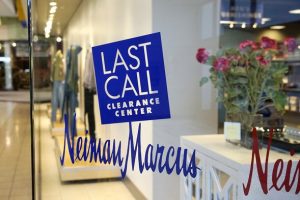 U.S. department store operator Neiman Marcus Group said on Tuesday it had ended talks regarding a partial or full sale of the company, three months after embarking on a review of strategic alternatives under the weight of a US$4.8 billion debt load.

The company’s debt pile made any acquisition very hard to structure. Talks between Neiman Marcus and its suitor Hudson’s Bay Co, the Canadian owner of high-end department store Saks Fifth Avenue, had made little progress because of this issue, Reuters reported in May.

Neiman Marcus does not face any significant debt maturities until 2020, when a term loan of nearly US$3 billion comes due, giving its private equity owners Ares Management LP and Canada Pension Plan Investment Board (CPPIB) time to try to turn the business around.

Neiman Marcus, struggling to seek relief from its debt burden, hired investment bank Lazard Ltd to bolster its balance sheet, Reuters reported in March, as the company continued to struggle with lackluster demand in the face of stiff competition from Amazon.com and fast-fashion retailers such as H&M and Zara.

To increase flexibility with creditors, Neiman Marcus announced in March it had named subsidiaries holding online store MyTheresa and some of its real estate “unrestricted,” making them not subject to the same rules under credit agreements as other units of the company.

The move could potentially allow Neiman Marcus to issue new debt to buy back its bonds at a discount, helping slash its debt pile.

Much of Neiman Marcus’s debt load stems from its US$6 billion leveraged buyout in 2013, when Ares and Canadian public pension fund CPPIB acquired it from other private equity firms.

The company on Tuesday reported its fourth straight quarterly loss, and posted a nearly 5 percent dip in same-store sales for the third quarter ending April 29. Neiman Marcus posted a net loss of US$24.9 million in the quarter, compared to a profit of US$3.8 million a year earlier.

“While looking ahead, we know challenges remain, but we are encouraged by the strategies we have in place to improve our operational efficiencies and performance,” Chief Executive Karen Katz said on a post-earnings call.

Retailers have struggled to cope with changes in consumer tastes as shoppers increasingly shop online or spend on travel and big-ticket home improvement items and less on apparel and accessories.

(Reporting by Siddharth Cavale in Bengaluru and Jessica DiNapoli in New York; additional reporting by Karina Dsouza in Bengaluru; Editing by Shounak Dasgupta and Phil Berlowitz)