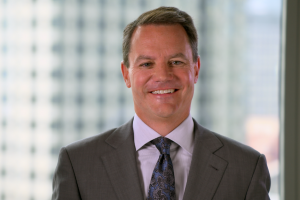 An Antares Capital executive who oversees the firm’s revamped middle-market lending partnership with Lone Star Funds sees the disruption in credit markets as an opportunity, particularly around second-lien loans.

“Debt capital markets and second-lien loans are already in a tough position,” Lyne said in a phone interview. “We expect that will probably deteriorate over the next few weeks. The more you see that happening, the more important it becomes for sponsors to focus on unitranche.”

Lyne oversees the Middle Market Growth Program, which has capital contributions from Antares Capital and Lone Star Funds. The program will provide capital for first-lien unitranche loans of $50 million to $350 million. Since the capital will come from Antares and Lone Star, loans won’t be syndicated to other investors, avoiding volatility in debt markets, Lyne said.

Lone Star and Antares originally teamed up in 2014 for the Middle Market Growth Program and inked 11 deals worth about $1 billion in a little more than a year. That was when Antares operated as a unit of GE Capital. The Middle Market Growth Program continued after GE Capital sold Antares to Canada Pension Plan Investment Board (CPPIB) for $12 billion in 2015. In the wake of the CPPIB deal, GE exited its involvement in the business.

“We’d always been committed to having a new unitranche program,” Lyne said. “We had a great 15 months with Lone Star and we worked really well together. We always said, ‘Let’s try to figure out a way to continue.’”

With its greater flexibility as a unit of CPPIB, Antares may also use its own balance sheet for loans, Lyne said. The program may also make loans in the healthcare sector as well for the first time. Prior to its CPPIB ownership, Antares couldn’t lend to healthcare companies because those loans were handled by a different unit of GE. Over time, healthcare could comprise up to 20 percent of the loan portfolio under the Middle Market Growth Program, Lyne said.

The first Middle Market Growth Program came after Antares teamed up with Ares Capital in 2010 for a Senior Secured Loan Program (SSLP) that grew to $10 billion prior to the CPPIB acquisition. Currently, Antares has no plans to launch another SSLP because the unitranche program handles loans up to a similar size as the old senior lending program.

It’s not unusual in the industry for two firms to work together on senior loan programs. Some SSLP alliances have been launched in recent years as traditional banks pull back from leveraged lending, including an effort by Ares Capital Corp to work with AIG-backed Varagon, among others.

Unitranche financing combines senior and subordinated debt into one term loan with pricing that blends the two tranches. The structure may offer lower legal costs, since it is comprised of only one tranche of debt, and greater speed to close since only one lender is involved.

Action Item: Antares can be reached through Communications Leader Carol Ann Wharton at carolann.wharton@antares.com or  203-229-1930.