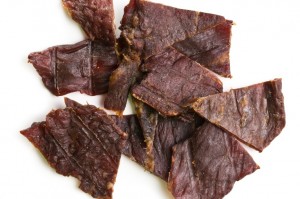 New York-based ACG, which invests in consumer brands, provided less than $10 million for a “significant” minority stake in Krave, says Julian Steinberg, a managing partner. He declined to disclose how big the holding was. The transaction closed in late December.

“Krave is an authentic and unique company, run by a fantastic team that is disrupting a huge category,” Steinberg says. “It is a perfect example of the type of pioneering, high-growth brand in which we seek to invest.”

Jonathan Sebastiani founded Krave, of Sonoma, Calif., in 2010. The company offers jerky that is made from natural beef, pork or turkey. Flavors include pineapple orange beef, lemon garlic turkey and sweet chipotle. Krave Jerky, which is artisanally produced, is sold nationally at stores such as Safeway, Target and Walgreens, but their concentration is more out West, Steinberg says. The ACG investment will help Krave distribute their products nationally as well as help drive consumer awareness, Steinberg says.

Raising awareness may be tricky. Jerky is viewed as a NASCAR or truck driver-type snack, Steinberg stays. The biggest customers for jerky are also young men of a less than affluent demographic, says a banking source, who called the jerky sector “tired” and “in need of a revamp.” The market is currently dominated by Slim Jim, made by Conagra, Oberto and Jack Link’s.

“There’s certainly an opportunity for an innovative and ‘cleaner’ brand,” the banker says.

ACG didn’t acquire the Krave stake via an auction process, Steinberg says. Neither ACG nor Krave used outside investment banks. But other PE firms, including TSG Consumer Partners and Catterton Partners, were interested in investing in Krave, a different source says. However, these larger shops needed to write equity checks of $20 million or more. ACG won because it was able to offer similar services but take a smaller stake, the person says.

The transaction is also the fifth from ACG’s debut fund, which raised $50 million in 2011. ACG targets emerging consumer products companies and typically invests from $2 million to $10 million equity per deal. Other investments include the Honest Kitchen, PawGanics, BabyGanics and EVOL. Fund I is less than 50% invested and ACG will likely seek to raise its second pool in 2014, Steinberg says.