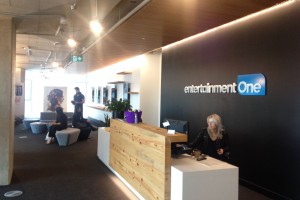 The fund could also push for a share buyback if the company does not act on its demands, made in January, to slow down the pace of acquisitions and improve cash flow, Livermore Managing Director David Neuhauser said in an interview.

Some investors have been concerned that the Toronto-based company, which has made several acquisitions and formed joint ventures in recent years, was focusing more on sales growth than its balance sheet. It said last year it was acquiring a majority stake in Astley Baker Davies, producer of the popular preschool franchise Peppa Pig.

Neuhauser said he would like to see more board members with media or capital markets experience and might be prepared at some point to propose alternative director nominees.

“That’s one area of severe weakness. There’s no one on the board to counter the current management’s strategy,” he said. “You don’t want a rubber stamp board. You want people who can push back.”

Entertainment One declined to comment, as did its biggest shareholder, Canada Pension Plan Investment Board (CPPIB).

Neuhauser declined to say what percentage stake Livermore held in the company. The fund was not on the list of Entertainment One’s top 10 shareholders compiled by Thomson Reuters.

Neuhauser’s remarks came about a month after media reports said U.K.-listed Entertainment One was in talks to be acquired by U.K. television network ITV. The company said it did not receive an approach from ITV.

Entertainment One’s 10-member board includes several lawyers, two directors with retail industry experience, and a CPPIB managing director, according to its website. One board member, Mark Opzoomer, has served as a top executive and director of several media companies.

Making adjustments to the board would boost investor confidence, said Neuhauser. The shares are “very undervalued” and the media sector is ripe for consolidation, he added.

Entertainment One’s stock has fallen about 38 percent in the past year. It has a market capitalization of US$1.1 billion.

Entertainment One has partnerships with media companies including DreamWorks Studios and production company Mark Gordon Co.

(Reporting by John Tilak; With additional reporting by Matt Scuffham in Toronto; Editing by Richard Chang)