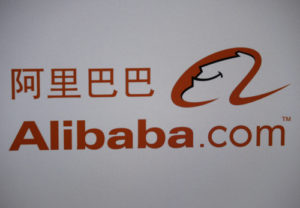 (Reuters) – Alibaba Group Holding Ltd‘s (BABA.N:) shares surged by more than 40 percent in their first day of trading on Friday as investors jumped in to buy what looks likely to be the largest IPO in history.

More than two hours after trading began at the New York Stock Exchange, the stock opened at $92.70 and rose from there, hitting a high of $99.70 in active trading, during which more than 100 million shares change hands in composite trading in the first 10 minutes of trading.

Cheers went out among traders on the NYSE floor at Wall and Broad Streets as the stock started to trade shortly before noon ET.

“This is by far the biggest IPO event-extravanganza that we’ve had,” said Peter Costa, floor trader at Empire Executions Inc.

The pricing on Thursday initially raised $21.8 billion for the Chinese e-commerce company. Scott Cutler, head of the New York Stock Exchange’s global listing business, told CNBC that underwriters would exercise their option for an additional 48 million shares, to bring the IPO’s size to about $25 billion, making it the largest IPO in history.

Alibaba is nearly unknown to most Americans but is ubiquitous in China, where it is responsible for 80 percent of online sales. The company earned $3.7 billion in the 12 months ended March 31, 2014, up about $2 billion from the prior 12-month period.

The sale values the company at about $168 billion, more than American icons such as Walt Disney Co (DIS.N and Coca-Cola Co (KO.N). Should the stock close at $98 on its first day, it would be worth about $241 billion, nearly the value of Wal-Mart Stores Inc (WMT.N).

Jack Ma, a former English teacher, founded Alibaba in 1999 in his apartment. His personal fortune is more than $14 billion on paper, vaulting him into the ranks of such tech billionaires as Bill Gates and Jeff Bezos. The deal is also expected to make millionaires out of a substantial chunk of the company’s managers, software engineers and other staff.

The rise in the stock exceeds the average gain by new IPOs on U.S. exchanges of late. In the second quarter, the average first-day gain was 9.2 percent, according to Renaissance Capital IPO Intelligence. Underwriters usually aim for a gain of 10 percent to 15 percent on the first day.

“We did put in for the IPO and we are getting an allocation, though not the full allocation we put in for. We probably got about 10 percent of that,” said Michael Matousek, head trader at U.S. Global Investors Inc in San Antonio.

Demand was intense among the retail investor crowd as well. J.J. Kinahan, chief market strategist at retail brokerage TD Ameritrade Holding Corp (AMTD.N: Quote, Profile, Research, Stock Buzz), said the company received customer orders amounting to about 70 percent of what it saw for Facebook, and about three times the customer orders it had for Twitter’s IPO.

Alibaba Group’s orange banners were festooned around the exchange, with its logo on NYSE computer screens. Ma was on hand at the trading floor to watch several long-time customers ring the opening bell at the exchange.

“I don’t want disappointed shareholders, I want to make sure they make money,” Ma said of the pricing, on CNBC, adding that he worries most when customers are happy.
NYSE held extensive tests to ensure it would be able to handle heavy trading volume and kept a call going on Friday with periodic updates to note the indicated price range and to say that systems were working properly.