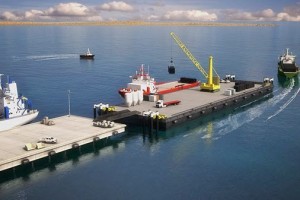 Australia’s Qube Holdings Ltd and Canada’s Brookfield Asset Management Inc are raising a A$1 billion (US$753 million) loan to help pay for the ports business of Asciano Ltd, in a carve-up of Australia’s largest ports and rail operator, people familiar with the transaction said on Tuesday.

Five banks – Australia & New Zealand Banking Group, Commonwealth Bank of Australia, Citigroup, National Australia Bank and Sumitomo Mitsui Banking Corp – are providing financing on a club basis, said the people, who declined to be identified due to the sensitivity of the matter.

The loan will be split into three– and five-year tranches and is expected to yield less than 200 basis points, based on the investment-grade credit profile of the ports business, the people said.

The loan is in addition to A$800-million of equity Qube is raising to pay for its share of the acquisition.

Qube and Brookfield, which were bidding against each other for Asciano assets for seven months, unveiled a A$9.1-billion (US$6.8 billion) plan earlier this month to split up the ports and rail giant into two units.

Brookfield and its consortium partners – Singapore sovereign wealth fund GIC Pte Ltd, British Columbia Investment Management Corp (bcIMC) and the Qatar Investment Authority – will jointly own 50 per cent of the ports business, while Qube will own the other half.

Separate debt financing for the acquisition of the rail business is also under consideration, the people said.

Qube and Brookfield’s acquisition plan means a A$1.9-billion loan that was earlier structured to back Brookfield’s previous bid for Asciano has fallen away.

A dozen lenders had committed to that loan by early October last year before the bid was blocked by Australia’s competition regulator.

Brookfield and Qube declined to comment when contacted about the latest financing.