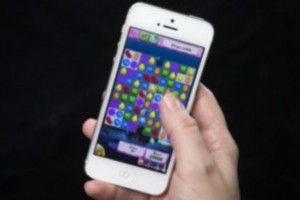 Shares in King Digital Entertainment Plc fell as much as 16 percent in their Wednesday debut, underscoring investor concern about the company’s reliance on “Candy Crush Saga” and dampening hopes that its coming-out party could revive investor interest in the mobile gaming industry.

Mobile game industry executives had looked to London-based King’s IPO, the largest by a gaming company since Zynga Inc went public in 2011, to help sweep aside skepticism over a notoriously fickle, volatile market.

Since Twitter’s market debut in November, King’s IPO was the largest U.S. tech IPO and the second-worst performing after textbook rental and academic service company Chegg Inc, which plummeted 23 percent, according to Thomson Reuters data.

The company offers over 180 games but its two-year-old “Candy Crush Saga” game, in which users move candies to line up at least three of the same color, accounted for over three-quarters of King’s revenue for the last three months of 2013.

“Once you have a hit, it’s hard to make a string of hits. How many bands were the Beatles?” Roger Kay, analyst at research firm Endpoint Technologies Associates said. “Also, there’ve been a lot of high priced IPOs and mergers and acquisitions (of late) and when valuations get frothy, investors get disappointed when returns don’t measure up to expectations.”

Candy Crush, a free game, is now a household name and has been downloaded more than 500 million times since its launch on mobile devices. Using the “freemium” model, King makes money by selling players extra lives and other add-ons.

When Zynga debuted in 2011 with about the same valuation as King, its stock ended down 5 percent on opening day.

“FarmVille” maker Zynga’s market value has since shrunk to just over $4 billion, falling victim to concerns about the danger of investing in companies that rely heavily on a hit game.

“This was mispriced,” Sterne Agee analyst Arvind Bhatia said of the King debut. “There are a lot of IPOs in the pipeline so investors are not starving … and are being picky. Today’s action also says investors are not going to ignore fundamentals.”

King’s shares closed down about 16 percent at $19.00 on Wednesday. JP Morgan, Credit Suisse and BofA Merrill Lynch were the lead underwriters for the offering.

There are some signs new titles from King’s portfolio may be gaining traction. Analysts have pointed out that “Farm Heroes Saga” has seen momentum since its January mobile launch.

The title has since landed on the list of top 10 highest-grossing apps on Apple’s iOS platform, but whether the game will prove to be a money-making title in coming months remains to be seen.

Despite its first-day fizzle, the company’s real test will be to convince investors that it can build a sustainable business.

“To us it’s not about today but (a run) over the course of years and executing our plans,” Hope Cochran, King’s chief financial officer, said in an interview. “Having a stable group of global franchises is really what we’re focused on.”

King sold 15.5 million shares of the 22.2 million offered, with the rest coming from stakeholders including private equity firm Apax Partners, which remains the biggest shareholder. King raised about $500 million in its IPO.

Unlike companies like Twitter that went public last year with no profits on their balance sheet, King has been profitable since 2005.

“Candy Crush,” which was first launched on Facebook in April 2012, was released on Apple devices in November that year and on Android devices a month later.

The stock’s less-than-impressive debut will be noted by youthful rivals such as San Francisco-based Kabam and Kixeye, known for strategy games like “Kingdoms of Camelot” and “War Commander”, which are looking to make market listings or secure new financing.

King has no debt and generated positive cash flow from operations for each of the last nine years. It posted profit before tax of $714.3 million in 2013.

Apax will retain a 44.2 percent stake in the company, if underwriters fully exercise their option to buy shares.

Chief executive Riccardo Zacconi, who has led King since co-founding the company in Sweden in 2003, will hold a 9.5 percent stake.