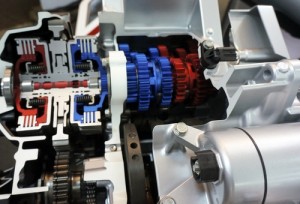 (Reuters) – Private equity firm Carlyle Group LP completed on Wednesday the sale of Metaldyne LLC for about $820 million to another buyout firm, its second divestment of a U.S. auto part supplier it picked up from bankruptcy in as many years.

Reuters reported in September that American Securities LLC was in the lead to buy Plymouth, Michigan-based Metaldyne for over $800 million from Carlyle. The two private equity firms announced the completion of the deal on Wednesday.

The sale of Metaldyne, three years after it filed for Chapter 11 bankruptcy protection, was agreed for $820 million plus related expenses, of which $296.5 million would be paid by American Securities as equity, Moody’s Investors Service Inc said on November 16.

High debt and a severe slump in vehicle production volumes in North America forced it into bankruptcy, but the company made an impressive comeback after it was taken over by Carlyle, which said on Wednesday it had exceeded its investment goals.

“We teamed with Metaldyne at the height of the Great Recession and the North American automotive industry crisis, believing we could grow the company,” said Michael Stewart, co-head of Carlyle Strategic Partners, the Washington, D.C.-based firm’s distressed investment arm which runs three funds.

In December 2011, Carlyle Strategic Partners announced the sale of another auto parts supplier it had picked up from bankruptcy, Diversified Machine Inc. This was also sold to a private equity firm, Platinum Equity.

“We plan to continue on the growth trajectory that the company is on. We are in a very solid market in the U.S. and Asia for auto demand. Europe is soft, declining and rationalizing, we feel OK with that,” said American Securities director Kevin Penn.

American Securities has no plans to merge HHI with Metaldyne. The private equity firm has been in hot pursuit of opportunities in the industrial sector after raising a $3.64 billion private equity fund in the summer.