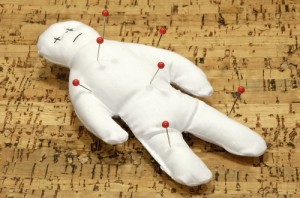 The Carlyle Group went public today in an attempt to break the curse of poor-performing IPOs from private equity firms.

Shares of the Carlyle Group opened at $22 in morning trading. UPDATE: Carlyle’s stock managed to stay above its $22 IPO price Thursday but just barely. Shares ended up closing at $22.05, a nickel above its offer price. However, in after hours trading, shares dropped to a low of $21.85, meaning that for a brief time the deal was ‘broken.”

The IPO values Carlyle at about $6.7 billion, according to an SEC filing.

Yesterday, the Washington, D.C.-based buyout shop raised $671 million after selling 30.5 million common units at $22 each, below its $23-$25 price range (but in line with price talk). J.P. Morgan, Citigroup and Credit Suisse are the bookrunners on the deal, while other underwriters include BofA Merrill Lynch, Barclays and Deutsche Bank. The underwriters have the option to buy another 4.57 million common units.

Carlyle, which has $147 billion in assets under management, is the latest PE firm to launch an IPO on a U.S. exchange. The first came from the Blackstone Group, which went public in 2007 at $31 a share. Apollo Global and Oaktree Capital Group have since followed Blackstone into the public market. The shares of all of those PE firms have performed poorly in the aftermarket. Blackstone is trading at about $13 a share, Apollo is going for $12.50 per share (which is down from its $19 IPO price) and Oaktree is trading at $40 (down from its $43 IPO price last month).

David Rubenstein, one of Carlyle’s co-founders, has reportedly told investors that he wants to prove that shares of a PE firm can rise. Only time will tell if Rubenstein will succeed in his mission, but so far it doesn’t look good.

One thing is clear. Carlyle’s three co-founders — Rubenstein, Daniel D’Aniello and William Conway — have added to their riches. The three execs did not sell any shares in the IPO. Each holds roughly a 15% stake, or about 47 million common units. Each of their stakes are worth about $1 billion at the the $22 share price.