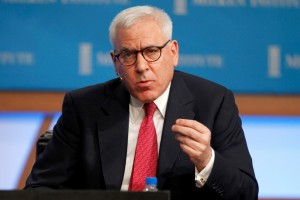 A major private equity firm, not based in the U.S., will likely join the ranks of seven large buyout shops that invest globally, says David Rubenstein, the Carlyle Group’s co-CEO and co-founder.

Rubenstein, who gave a keynote interview at PartnerConnect Wednesday, says there are “some 5,000 private equity firms in the world” but only seven that can invest all over the world. This group–which includes Carlyle, the Blackstone Group, Bain Capital, KKR, TPG, Oaktree and Apollo Global — has multiple funds and uses their brands to raise money in different areas, he says. The seven firms are based in the U.S., but this may change, he said.

“Five to ten years from now there will be a global PE firm not based in the U.S.,” he said.

He didn’t mention which firm could possibly join this auspicious group.

Rubenstein didn’t comment on the Dell takeover but did say that large buyout deals, like the $45 billion sale of TXU in 2007, have not produced spectacular returns. The Dell takeover doesn’t mean that $20 billion buyouts are about to return, he said. Instead, transactions in the range of $5 billion to $7 billion will likely be “more normal,” he said. Club deals likely won’t return, he said. Instead, LPs will likely want to coinvest more with PE firms on deals to avoid fees. “There won’t be five to six PE firm’s teaming up as before,” he said.

The Carlyle co-CEO also explained why Cypress is important. The country is not a place with “lots of great private equity investments,” he said. However, Cypress is making investors realize that a “government can come in and wipe out your assets.”

There has been lots of speculation among the press about when Rubenstein, or the other Carlyle cofounders, will step down. Rubenstein, 63, didn’t provide any guidance Wednesday. Jokingly, he told the PartnerConnect audience: “I will follow the Pope’s lead and will retire at 85.”

While Rubenstein wouldn’t mention any contenders to private equity’s “group of seven,” others are positing some contenders. Adam Sokoloff, Jefferies & Co.’s global head of the financial sponsor group, said that a U.K. firm such as CVC, BC Partners or Apax could possibly join the group.

–Steve Gelsi contributed to this report