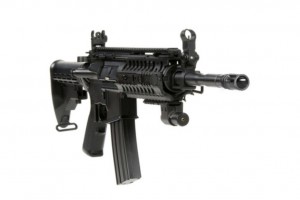 Cerberus Capital Management LP is working on a mechanism that would allow its fund investors to exit Freedom Group Inc, the maker of the Bushmaster rifle used in the Newtown, Connecticut school shooting rampage, people familiar with the matter said on Sunday.

The move comes a year after the New York-based private equity firm said it would sell Freedom Group, a pledge that was made four days after 26 people, most of them children, were killed at the Sandy Hook Elementary School in Newtown.

It is the clearest indication yet that Cerberus has been struggling to sell Freedom Group amid reluctance from Wall Street banks to finance such a transaction, though people familiar with the matter said efforts were continuing to attract a feasible offer.

Full details of the mechanism were not disclosed but the sources said Cerberus would seek a credit amendment with existing lenders of Freedom Group on Monday for a new debt facility in a conference call organized by Bank of America Merrill Lynch (BAC.N).

The new debt will come from an undisclosed financial institution, that will also make an equity investment in Freedom Group, the people said. The money will be used to offer those Cerberus fund investors wishing to divest their equity interest in Freedom Group the option to do so, the people added.

It should become apparent in the next two weeks whether Cerberus decides to use this mechanism instead of pursuing an outright sale of Freedom Group with its fund investors still in the deal, as it has done so far, the people said.

The sources, who spoke on condition of anonymity because they were not authorized to speak to the media, did not disclose the size of the equity and debt investments or the valuation at which Cerberus fund investors could decide to exit Freedom Group. Many details were yet to be determined, they added.

Cerberus and Bank of America declined to comment while Freedom Group representatives did not respond to requests for comment.

Cerberus’ fund investors include some of the largest U.S. public pension funds as well as endowments and insurance firms. Some of them, such as California State Teachers’ Retirement System (CalSTRS) and University of California, said after the Newtown shootings that they would review their gun investments, including the Cerberus funds that owned Freedom Group.

A CalSTRS spokesman said the fund had sold off its holdings in public companies such as Smith & Wesson Holding Corp (SWHC.O) earlier this year. He declined to comment on whether CalSTRS would take Cerberus up on its offer, saying only that the fund had been disappointed that Cerberus had not sold Freedom Group.

A spokeswoman for the University of California said the fund had divested all its stakes in firearms several months ago.

Cerberus founder and CEO Stephen Feinberg dropped plans last summer to offer to buy Freedom Group on expectations that another buyer would emerge and would be willing to pay enough to the investors so that they would not take a loss, people familiar with matter said in July.

GUN SALES ON THE RISE

On December 14, 2012, 20-year-old Adam Lanza, who had grown up in Newtown, killed his mother before driving to the school, where he killed 20 children and six adults. He then turned the gun on himself.

The massacre inspired a package of national gun control measures in Congress as well as calls for better security in schools, including the presence of armed guards.

The bills, which included a national ban on assault weapons and expanding the use of background checks for gun purchases, were ultimately rejected after U.S. lawmakers decided they would have interfered with Americans’ constitutional right to bear arms.

Still, speculation over legislation limiting gun rights has persisted, driving up sales of fire arms as well as the shares of gun makers in the stock market. Sturm Ruger & Co Inc (RGR.N) shares are up 60 percent so far this year and Smith & Wesson shares are up 42 percent, while the S&P 500 Index .INX is up 25 percent.

Freedom Group itself has posted bumper profits so far this year. Nine-month net sales to the end of September were $1.02 billion, up 51 percent year-on-year, while nine-month net income was $94.2 million, up from just $300,000 a year ago, according to the company’s latest earnings statement.

The New York-based private equity firm struggled to find an investment bank willing to take on the perceived reputational risk associated with Freedom Group before hiring Lazard Freres & Co LLC (LAZ.N) as an adviser on the auction, according to people familiar with the matter.

Cerberus registered Freedom Group for an IPO in 2009 but pulled the filing in 2011 amid slowing gun sales and the resignation of Chief Executive Ted Torbeck. The company is now headed by former Cerberus managing director George Kollitides.

Cerberus bought firearms maker Bushmaster in 2006 and later merged it with other gun companies to create Freedom Group.

Cerberus has more than $20 billion in assets under management.