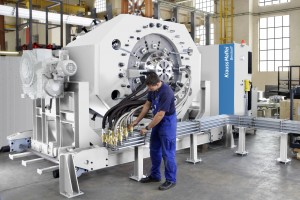 The biggest-ever Chinese acquisition of a German company was announced on Monday, with a consortium led by state-owned China National Chemical Corp (ChemChina) buying industrial machinery maker KraussMaffei Group for about US$1 billion.

The deal is the latest example in recent years of deep-pocketed Chinese companies seeking to gain the technological expertise, distribution networks and branding of Western firms, often built up over several decades.

It also comes at a time when China’s weakening currency is encouraging companies from the country to shift investments overseas, which is expected to drive more deal-making this year.

ChemChina will take two-thirds of KraussMaffei, which started out as a locomotive maker in Munich in the 1830s before expanding into tank-making in the 1930s, and now manufactures machinery for processing plastics and rubber.

The deal beats the previous record for a Chinese group’s acquisition of a German company, set in 2012 when Sany Heavy Industry Co Ltd bought concrete pump maker Putzmeister Holding GmbH for US$698 million.

Chinese firms spent around a record US$116 billion on mergers and acquisitions (M&A) in 2015, according to Thomson Reuters data.

ChemChina itself bought Italian tyre maker Pirelli for 7.3 billion euros last year and has also been discussing the possibility of buying Swiss chemicals firm Syngenta. A person familiar with ChemChina’s thinking said it was still keen on pursuing the Syngenta acquisition.

Germany welcomes investment from Chinese companies, as long as there are no national security concerns, bankers and lawyers said. So far no such M&A moves have been hampered by political intervention, whereas in the United States Chinese takeovers are a sensitive political issue.

Chinese banker Henry Cai, who founded AGIC Capital last year, played a key role in making the KraussMaffei deal happen, according to a source familiar with the matter.

The veteran Asia dealmaker is one of the region’s most highly paid bankers and is dubbed the “grandfather of China’s capital markets” in the industry.

“We see big opportunities in industrial development, particularly in intelligent manufacturing,” Cai, a former China dealmaker at Deutsche Bank and UBS, said of the KraussMaffei acquisition. It represents the first investment for AGIC, which has offices in Beijing, Shanghai, Hong Kong and Munich.

The deal values unlisted KraussMaffei at about 6.6 times its earnings before interest, taxes, depreciation, and amortization (EBITDA). Onex had said in its third-quarter report published in November that KraussMaffei posted EBITDA of 140 million euros for the previous 12 months.

The transaction is likely to close in the first half of 2016, subject to regulatory approval, Onex said. The Canadian private equity firm bought KraussMaffei from U.S. investor Madison Capital in 2012 in a 568 million euro deal.

Standard Chartered and Freshfields advised the buyer group and Barclays, HengelerMueller and Fangda advised KraussMaffei, according to people familiar with the matter, who declined to be declined as the information is not public.

ChemChina did not immediately respond to an e-mail seeking comment on the deal. Guoxin could not be reached for comment.

By Elzio Barreto and Denny Thomas