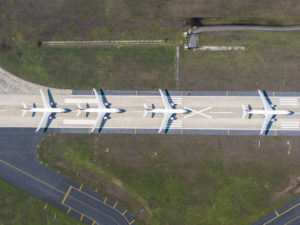 Vantage Airport Group and Corsair Capital, through its infrastructure arm, clinched a $4.2 billion deal to develop a new international terminal at John F Kennedy International Airport, one of the busiest airports in the world. Vantage Airport Group is wholly owned by Corsair. The company was selected by the Port Authority of New York and New Jersey to finance, build and manage the new Terminal 6.

Following the deal, PE Hub caught up with Hari Rajan, partner and head of infrastructure at Corsair, together with George Casey, chair and chief executive of Vantage Airport Group, who is also the board chair of JFK Millennium Partners. JFK Millennium has three other investors, including JetBlue, but Vantage has the controlling stake.

The opportunity to upgrade terminals at major airports puts Corsair in a bullish position to drive up returns, capitalizing on a model whereby the New York-based PE firm puts the equity, financial sponsorship and operations under the same umbrella. Adding to the bullish mood is that, since the pandemic-induced drop in air travel, traffic is surging at airports.

“We were bullish about traffic volumes in general and globally as an investor,” Rajan said. “That’s a theme that we are keen to put capital behind, assuming that it can be done in the right type of deals that have the right elements to them.”

Even as the world faces an economic slowdown that will likely have impacts across different sectors, Rajan expressed confidence that Corsair will navigate the situation. “With private equity sponsorship, there is a certain amount of innovation and creativity and nimbleness in deal structuring that can get you through a volatile period like this.”

Vantage has worked with more than 30 airports around the world, transitioning 20 of them from public to private management, including recent work at LaGuardia Airport in New York.

Corsair was also upbeat about opportunities within the sector.

“There is a rich menu of opportunities to choose from,” Rajan said. “It’s all about identifying the ones that are most likely to be actionable, and that is very much a function of the specific dynamics around that asset, the politics, the individuals involved, the construction and design elements, the labor markets, among others, which as a financial sponsor you are much better off doing in partnership with an actual operator, as opposed to just looking at it from the deal perspective.”

With this deal, Corsair goes beyond its traditional role in private equity of just providing capital. “We have a model wherein the operations, the equity and the financial sponsorship are all under the same umbrella,” said Rajan about the structure, which is different from the norm where the capital comes from one place and the operational and management function from another.

This model, he said, benefits investors and counterparties. “If you are an investor, we think this helps in a number of regards because you are investing through an approach that is not outsourcing the operations and management of the asset, but actually has an inbuilt full-scale operational function.”

Counterparties such as local authorities, airlines, state entities or port authorities will “love the idea that their investor is also operating the terminal because they don’t have to take the alignment risk between the capital and whoever the operator is,” said Rajan.