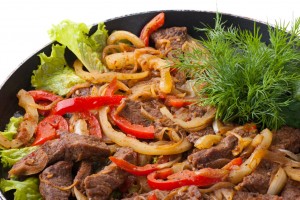 For a third time, CTI Foods will find itself owned by a private equity firm.

Greenwich, Conn.-based Littlejohn acquired CTI from CIC Partners in April 2010. CIC, of Dallas, partnered with then CEO Kirk Smith in 2003 to buy the company from J.R. Simplot Co.

CIC retained a residual stake in CTI but is selling out to THL and Goldman, a source says.

Wilder, Idaho-based CTI makes food products — like pre-cooked taco meat, and steak and chicken fajita meat — for quick service restaurants. The company generated more than $700 million in revenues for the 12 months ended Sept. 3, according to a December report from Moody’s investors Service.

It’s not clear how much THL and Goldman are investing. Bloomberg News, in April, said the sale of CTI could fetch $500 million.

The transaction is the latest for THL in the food production/distribution/services space. In 2005, THL, along with Bain Capital and the Carlyle Group, acquired Dunkin’ Brands in a $2.4 billion deal. The Boston PE firm invested roughly $340 million as part of the deal, a different source says. THL exited Dunkin’ in August 2012 when it reportedly liquidated a 10% stake worth $413.76 million. THL achieved a return of roughly 3x its initial investment in Dunkin’ Brands, the person says.

THL also bought Michael Foods in 2003 for $1.05 billion. The PE firm invested about $290 million in the company, the second source said. In 2010, THL sold 80% of Michael Foods to GS Capital Partners in a deal valued at $1.7 billion. The buyout shop scored a more than 3x return of its initial investment at the time of the sale, the person says. THL still retains 20% of Michael Foods.

THL is currently investing from its sixth buyout, which closed at $8.1 billion in 2007. The firm has yet to begin fundraising for its next buyout pool, peHUB reported in April.

The Goldman merchant banking division hasn’t raised a PE fund since 2007 when it closed GS Capital Partners VI at $20.7 billion. In September, LBO Wire reported that Goldman had wrapped up its investment stage for the fund and is holding off raising a new pool until it gets clarification on legislation like the JOBS Act.