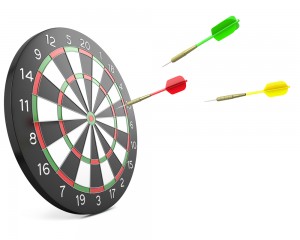 The potential $20 billion deal to take Dell Inc. private, which would be the largest buyout in years, should not be seen as a harbinger of more blockbuster deals, market sources said.

Founder Michael Dell already holds a 15.7 percent stake in the computer maker, valued at around $3.6 billion at the time of the deal’s announcement, and has committed to providing around half of the $8 billion to $9 billion in equity that would be needed for a deal.

Thus, a potential Dell buyout would require only around $4 billion from his partners, which are reportedly Silver Lake Management LLC and Microsoft Corp. The rest of the buyout would be funded through debt, according to reports. The timing of the deal also comes as Dell faces more competition from tablets and mobile, and its stock was around $11 per share when the deal was announced, down around 30 percent from around $18 per share in January 2012. 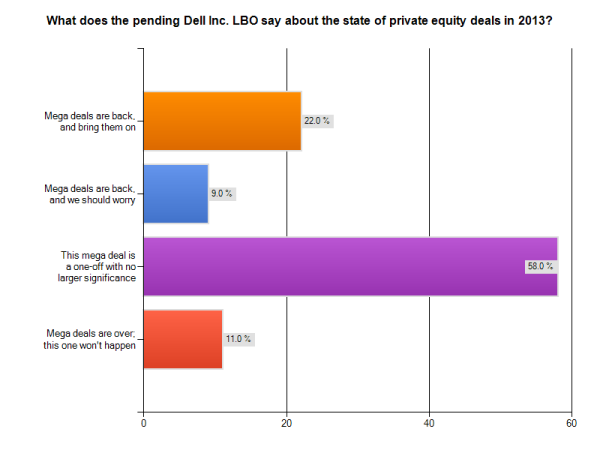 (Here are the results of a peHUB reader poll on the same question.)

A more typical deal of that size would require more private equity investment, so the Dell deal isn’t indicative of a common trend. But potential large deals aren’t being held back by financing, sources said. “There’s plenty of private equity money, and there’s plenty of debt capital. They need to be put to work and they can be put to work with more efficiency on a large deal,” said Ronald Kahn, a managing director of Lincoln International LLC, a mergers and acquisitions advisory firm.

However, uncertainty surrounding fiscal talks in Washington, D.C., the continuation of low interest rates, and companies’ earnings outlook has caused some investors to wait. “Right now, there’s not a lot of activity,” Kahn said.

The Blackstone Group, which isn’t involved in the Dell deal, also reported a quiet environment during the company’s fourth quarter earnings call on Jan. 31. “The M&A market is pretty darn slow,” said Tony James, Blackstone’s president, who also attributed it to economic uncertainty and sellers waiting for the economy to improve for a better return.

Sanders said that a big deal could be done in most business sectors and there isn’t a particular industry that is more vulnerable to big deals. But when it comes to specific companies, a successful deal relies on having a solid management strategy and knowing where growth opportunities are, rather than just focusing on the financial figures in a company’s earnings report.

Roland Li is a contributor to peHub