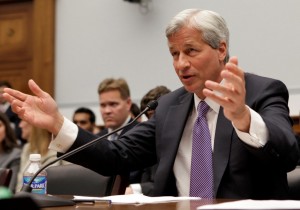 Private equity execs should be relieved.

Jamie Dimon’s testimony is over. For the past few weeks, JPMorgan’s CEO has defended the nation’s biggest bank by assets in Congressional hearings before the Senate and House. Private equity, for the most part, wasn’t dragged into the discussion.

Last month, when JPMorgan revealed the $2 billion trading loss (which some say is hitting $3 billion), many thought it would breathe new life into the Volcker Rule. The provision, part of the Dodd-Frank financial reform that was signed into law two years ago, is designed to limit trading for profit by federally backed banks, according to the Wall Street Journal. Wall Street has lobbied heavily against the bill, which they claim would stifle their ability to hedge against risk, Dealbook says.

Dimon’s testimony, yesterday before the House Financial Services Committee and last week before the Senate Banking Committee, elicited little interest in private equity. Instead, the focus was on credit default swaps, portfolio hedging and JPMorgan’s failed trading strategy. David Fann, president and CEO of TorreyCove Capital Partners, a PE advisory firm, says he was worried when the JPMorgan trading losses came to light that regulators could tighten Volcker and stop IBs from participating in all risky asset classes, including private equity, he says.

Those fears appear to be unfounded. “As of today, based on what we know and what’s been discussed, PE has not been the target of any additional changes,” Fann says.

The hearings may be over but regulators are still considering revisions to the Volcker Rule. Banks, under the rule, can take no more than a 3% stake in sponsored funds. They also may invest no more than 3% of their total regulatory capital, or Tier 1 capital, in PE or hedge funds, according to Law360. Some bank LPs are holding off investing in U.S. funds to see how the rule shakes out, one placement agent tells peHUB.

The law was supposed to take effect in July. However, regulators in April extended the deadline for banks to comply with the rule until 2014.

Two years ago, many large commercial banks contemplated separating their PE unit. Some, like Bank of America, actually did. Investment banks, like Goldman Sachs and Morgan Stanley, are moving to comply with the rule. In late 2010, Goldman, which is a bank holding company, saw its proprietary trading operations move over to KKR. But Goldman retains its PE unit, GS Capital.  Goldman revealed recently that it sold some of its investments in a hedge fund in a bid to comply with Volcker (Goldman is also reportedly looking to sell its hedge fund administration unit to State Street).

Morgan Stanley, meanwhile, is reportedly considering its options for its commodities trading unit.

One PE exec says JPMorgan’s $2 billion losses will have little impact on private equity. “Before Dodd-Frank there was enough regulation [of banks],” the exec says. “It just wasn’t enforced. I’m not sure how much more you can regulate things.”