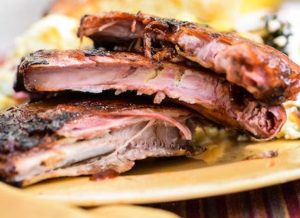 Dobbs Equity Partners is the family office of John Hull Dobbs Jr. The family made its money by investing and operating a number of businesses, including automobile dealerships and restaurant and airline catering. The family also started Three River Holdings Inc, which operated a Medicare plan in several states.

“While we are a family business, we have come to know and respect the Dobbs family and are confident that the individual strengths of our two long-time Memphis families combined will take Corky’s to the next level,” Andy Woodman said in a statement.

With the investment, Corky’s plans to add 15 restaurant locations over the next three years, Dobbs said.

“They have fabulous food,” said John H. Dobbs Jr, CEO of Dobbs Equity, who revealed he eats BBQ at least once a week.

Dobbs Equity, also of Memphis, looks to invest in companies that are in transition, whether a change of management or a family succession.

Companies should be profitable (greater than $3 million Ebitda), have a solid management team and want to grow the business with a long-term partner, Dobbs said.

“People who want the stability of long-term investors, and our connections throughout the country, want us,” Dobbs said.

Dobbs has invested in restaurants before. The family owned Dobbs Houses Inc, a restaurant and airline caterer, that it sold in 1970. The current portfolio of Dobbs Equity includes Diamond Specialty Insurance, Hull Dobbs Automotive and Finishing Innovations.

Although Corky’s did not run a process, the company used an investment banker on the deal. Rob Arnold and Roger Woodman of Raymond James, along with Randy Karchmer of Metronome Partners, advised Corky’s and brought the company to Dobbs’s attention this year. Talks began in January or February, with the deal closing on June 6th.

One addition to Corky’s menu Dobbs is bringing back is the Black Bottom pie sold by Dobbs Houses in the 1950s. The pie is a mix of bitter chocolate and rum served on a gingersnap crust.

“People still come to me today and ask me about the Black Bottom pie,” he said.

FirstBank provided financing for the transaction. Bass Berry & Sims provided legal advice to Dobbs, while Baker, Donelson was the attorney for Corky’s.