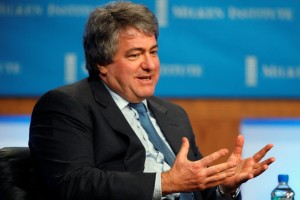 (Reuters) – EP Energy LLC, the oil and gas company bought just last year by a private equity consortium led by Apollo Global Management LLC for $7.15 billion, is working with investment banks to prepare for an initial public offering as soon as this year, three people familiar with the matter said on Monday.

The company has not yet formally mandated underwriters to lead the proposed offering, but has asked several investment banks to draw up plans for a possible IPO, the people said.

An initial filing with U.S. regulators may come within the next few months and could value the company at more than $8 billion, one of the people said.

The people spoke on the condition of anonymity because the process is not yet public. They cautioned that Apollo has not yet made a decision on the timing of the IPO and could postpone any plans if market conditions worsen.

An initial public offering this year would represent an unusually fast exit by private equity, highlighting Apollo’s eagerness to capitalize on high oil prices and equity markets that have been very strong until recently. Buyout firms typically hold portfolio companies for between three to seven years before seeking an IPO.

It would also underscore Apollo’s affinity for stock market offerings. The New York-based private equity firm has floated or has registered to float eight companies in the U.S. stock market so far this year, including Norwegian Cruise Line Holdings Ltd and real estate and relocation services provider Realogy Holdings Corp.

Earlier this month, EP Energy struck three separate deals to sell off some of its natural gas and coal bed methane properties, raising $1.3 billion from the sales.

Following these transactions, EP Energy will be a more oil-focused company, with assets in Texas’ Eagle Ford and Wolfcamp shales, as well as Utah’s Uinta basin. It also held onto its highest return natural gas asset in the Haynesville shale.

Before these deals, Apollo’s $809 million investment in EP Energy was valued at $971 million as of the end of March, a 20 percent return in less than a year, a regulatory filing showed last week.

The Apollo-led group bought the El Paso assets from Kinder Morgan Inc, which had in turn acquired them as part of its $21 billion takeover of El Paso, but was only interested in owning that company’s pipeline assets.

Apollo co-founder Josh Harris said earlier this month he believed his private equity firm had bought $12 billion worth of assets for the $7 billion sticker price of the EP Energy deal.

“We were able to buy oil and gas for about a third to 40 percent off the futures curve and then we go and we hedge, so we create a big arbitrage,” Harris told the Deutsche Bank financial services conference on June 5.

Another Apollo-backed oil and gas company — Athlon Energy Inc — filed with U.S. regulators to raise up to $345 million in an IPO earlier this month.