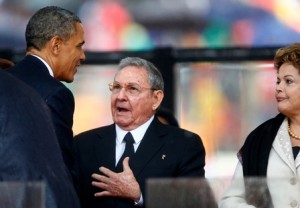 “Cuba is literally right off our shores,” said attorney George Nemphos, chair of Duane Morris’ Global Corporate Practice Group and head of the firm’s Baltimore office. “This could be a tremendous opportunity for investment… This has the potential to bring desperately needed goods and services, and an economic stimulus, to Cuba. It would be great if U.S. private equity groups were deeply involved in that.”

President Obama said in December the U.S. would seek to normalize diplomatic relations with Cuba. The shift meant a relaxation in the flow of commerce and transportation by the United States to Cuba after more than 50 years, Reuters said.

The softened stance has already started. This month, the Treasury and Commerce Departments made it easier for Americans to travel to the island country. Now, Americans don’t need a special license to travel to the country. Airlines and travel agents can also provide service to Cuba without a specific license, the New York Times said.

While President Obama may have given the go-ahead to ease restrictions, the U.S. government will have to take official steps to remove the embargo against Cuba. Any softening will come in stages with different industries opening up over time, Nemphos said. He expects manufacturing, food-related and consumer products industries to come first and then infrastructure. The U.S. government will likely enact regulation to monitor and watch over the types of investments and products, particularly technology, that are delivered to Cuba, Nemphos said.

“It will be years before the economy and currency are stable enough to where sophisticated private equity sponsors will feel comfortable jumping in,” one LP said.

Cuba has formal diplomatic relations with 160 countries, but is considered high-risk for investors. Normalized relations do not mean the country will become capitalist, one placement agent said. Cuba lacks the infrastructure as well as the legal system to protect property rights, sources said. If a private equity firm successfully made and exited an investment, it is not clear how they would get the capital out of the country, the placement agent said.

A second LP pointed to private equity’s experience with China and India. Firms rushed into the countries in the mid-2000s and got burned, the source said. Private equity will likely consider that experience before focusing on Cuba, the investor said.

It will be portfolio companies — and not the PE funds — that will to make inroads into Cuba first, sources said. Nemphos pointed to sovereign wealth funds coming out of Asia and the Middle East as potential investors.

Cuba is “not really a PE play,” a second placement agent said. “This will be a bigger boon to corporate investors with very long term views that would look to recycle capital in Cuba.”

Travel is the sector that will see the most immediate benefit from normalized relations, Nemphos said. But even that is complicated. Europeans are more willing to experience different ways to travel, while Americans and Asians typically want top-class accommodations, he said. “Americans are picky,” Nemphos said.

Nemphos said he wouldn’t be shocked if investments roll in faster once Cuba’s economy grows and its infrastructure improves. “It will take a long time, but stranger things can happen,” he said.

Outside of Cuba, Latin America has become a major destination for private equity. Twenty-three separate funds raised $3.5 billion during the first half of 2014, according to data from the Latin American Private Equity & Venture Capital Association.

Several large buyout shops, including Pátria (which is 40 percent owned by Blackstone Group), Gávea Investimentos, Advent International, and the Carlyle Group, have raised funds targeting investments in the region.