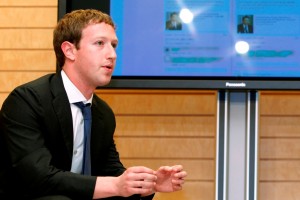 Facebook decided to tell analysts to cut estimates due to feedback during the investor roadshow which revealed users were opting for mobile devices which generate less advertising revenue and after consulting with its adviser Morgan Stanley.

“Facebook backed off and said, ‘Hey get your models down.'” said a person at one of the underwriters with knowledge of the situation.

Facebook’s advisory came around May 9, the day it published an amended prospectus that included a cautionary note about lower advertising revenue.

It isn’t known which analysts from the 33 IPO underwriters were contacted by Facebook with the revised guidance. It also isn’t clear exactly who from Facebook gave the guidance.

As previously reported by Reuters, the analysts for lead underwriter Morgan Stanley and at least three other underwriters in the following days reduced their forecasts for Facebook’s second-quarter and full year revenue, and communicated this to at least some of their institutional clients.

“Morgan Stanley bankers were telling the company how to handle the research analysts,” said a source from one of the underwriting firms with knowledge of the situation.

“Facebook changed the numbers–they didn’t forecast their business right and they changed their numbers and told analysts,” said another source at one of the underwriters with knowledge of the situation.

“The analyst’s underwriters then all changed their numbers based on what management was telling them.”

Officials at Facebook declined to comment. Morgan Stanley released a statement saying it followed the same procedures with Facebook that it does for all IPOs. “These procedures are in compliance with all applicable regulations,” spokesman Pen Pendleton said in the statement.

“In response to the information about business trends, a significant number of research analysts in the syndicate who were participating in investor education reduced their earnings views to reflect their estimate of the impact of the new information. These revised views were taken into account in the pricing of the IPO,” the Morgan Stanley statement said.

Federal and state regulators said Tuesday that they were looking into various issues surrounding the Facebook IPO, including whether big investors got key information that was not available to all investors.

For Facebook and Morgan Stanley, news about the revised projections has further undermined confidence in the social media company’s shares.