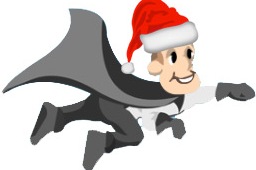 Shareholder Representative Services is trying something new this holiday season.

SRS is unveiling AcqMan — acq is short for acquisition–a game which tests players’ knowledge of M&A. This is how it works: Users pick from six different AcqMan avatars that represent different deep-pocketed strategic buyers. Choices include Dell, Google, IBM, Microsoft, Oracle and Takeda.

The game gets going when AcqMan flies through a city and gobbles up PE- or VC-backed sellers like OMGPOP, Flixster, Canesta or Yammer. Users get two points for each correct guess and lose two if they are wrong. There is also the possibility of picking up bonus points if you collect “customers” (the woman loaded with cash). But beware of the patent troll flying birds. The highest score possible is 14, according to Anna Bruno, SRS’ marketing director. That happens when players collect all five correct startups, avoid the wrong guesses and collect the 4 customer bonus points.

AcqMan is a departure for SRS, which usually comes out with a humorous holiday video. Last year, SRS’ video took viewers on a walk through a creepy house searching for the best exit (it was set to the tune of “Rocky Horror Picture Show”). SRS’s video in 2011 featured Steve Jobs and George Washington (who couldn’t get a good signal on his iPhone) riding in a Toyota pickup truck to a tea party with Sarah Palin and Nancy Pelosi.

“We wanted to push the envelope of what holiday cards have done in the past,” Bruno says of AcqMan. “This is a really neat little game that people can enjoy.”

SRS began developing the game in August and hired Green Iguana Productions to build it. SRS, which advises PE and VC-backed companies after they are sold, plans to send the game to all of its 400 institutional investors, plus shareholders involved in any of its 400 deals, Bruno says.