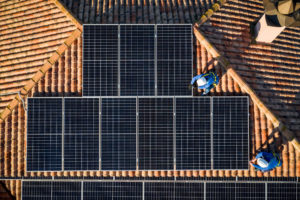 Based in Austin, Texas, Greenbelt last week made a majority investment in Albuquerque, New Mexico-based Unirac, which specializes in solar photovoltaic mounting. Existing investor Tenex Capital Management, along with Unirac’s management team, will continue to own a significant stake in the business.

“Given the steadily increasing cost of utilities, the economics of going solar are very compelling,” said Murphy. “We are also in an environment where many constituents are looking for more sustainable forms of energy, and solar is a great way to provide that.”

Solar energy consumption is increasing in the US, edging closer to biofuels and hydroelectricity, according to data from the US Independent Energy Administration.

Greenbelt is focusing on the “new energy economy,” which involves aspects such as energy efficiency for homeowners or commercial and industrial properties, Murphy said.

Unirac was founded in 1999. It has completed over 1.5 million distributed generation installations and calls itself a one-stop-shop for solar mounting services.

The recently signed Inflation Reduction Act (IRA), which favors renewable energy, has aspects in it that incentivize solar energy, Murphy said: “The investment tax credit included in the Inflation Reduction Act was extended for 10 years at 30 percent. That savings is not only beneficial to the owner of the solar system, but it also gives a greater degree of certainty around the tax credit than the US solar complex has ever had.”

Earlier this year, the solar industry was affected by the US Department of Commerce’s investigation into whether some imports were in violation of the anti-dumping rules. Coupled with the snarled supply chain problems that arose the during the pandemic, players in the sector were wrestling to meet demand for solar components.

According to Murphy, Unirac’s management showed resiliency in navigating the supply challenges, something that impressed Greenbelt. However, he said the panel imports issue had a much more negative effect on the utility landscape than on the residential or commercial and industrial market.

“One thing that really impressed us with the management team at Unirac has been their ability to navigate the supply chain challenges that has impacted products, services and businesses across all industries,” he said. “They [Unirac] have a very efficient and nimble global supply chain that has allowed them to provide products on time schedule relative to the competition.”

To scale Unirac, Murphy said Greenbelt is looking forward to both organic and inorganic growth.

“There is definitely an M&A story that we were drawn to within the solar product space, and we think Unirac is a compelling platform to act as the acquirer of choice within that sector,” he said.