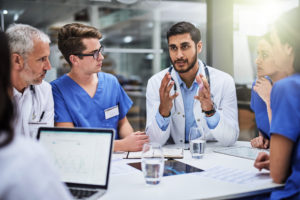 TPG Capital is investing in Kelsey-Seybold Clinic, a doctor-owned integrated healthcare organization in the greater Houston area, according to three sources familiar with the matter.

The private equity firm, based in Fort Worth, Texas, and San Francisco, has agreed to make a minority investment in the medical group, two of the sources said. Kelsey-Seybold’s physician-owners will remain majority shareholders, they said.

The investment is being allocated out of both TPG Partners VIII and TPG Healthcare Partners, a sidecar vehicle focused on healthcare investing, one source said. The funds closed at a combined $14.2 billion earlier this month, with the firm’s first-ever dedicated healthcare pool collecting $2.7 billion, Buyouts reported.

While TPG has remained a prolific buyer of North American healthcare assets—putting capital to work in everything from payer services to biotech year-to-date—Kelsey-Seybold is notable as it marks the firm’s return to the physician practice arena. Previous physician platforms included Surgical Care Affiliates, which UnitedHealth Group’s Optum unit bought for $2.3 billion in 2017.

The deal comes several months after Buyouts reported Kelsey-Seybold was gearing up to explore strategic options, including potential transactions with financial sponsors. Evercore was engaged to provide financial advice to the Pearland, Texas, medical group, Buyouts reported in December.

TPG was selected several weeks ago among finalists, two sources said. The process encompassed a narrow group of sponsors, including some family offices, one of the people said.

Founded in 1949 by Dr. Mavis Kelsey, Kelsey-Seybold is one of the largest physician-owned multi-specialty group practices in the greater Houston area, with more than 50 medical specialties across 21 clinics and a sleep center, according to its website. Kelsey-Seybold also is a major provider of healthcare to employees of NASA.

Kelsey-Seybold also owns its own Medicare Advantage plan for seniors, Kelsey-Care Advantage. The MA plan is a big contributor to Ebitda, which two sources placed at approximately $100 million.

Large buyout firms were attracted to Kelsey-Seybold’s unique risk-bearing model, which aligns with the healthcare system’s movement toward value-based care, sources said. Under risk-based and value-based payment models, providers assume financial risk and are encouraged to prioritize quality and lower costs. This is different from fee-for-service models that incentivize volume.

Kelsey-Seybold’s existing scale and space for continued growth in Houston, the fourth-largest city in the country, was also perceived attractive, one source noted. Kelsey’s existing network encompasses 400-plus providers.

The healthcare organization was anticipated to command more than $1 billion enterprise value, sources said. One source estimated a pricetag around $1.3 billion.

In relevant activity, Ares Management in August 2017 invested in DuPage Medical Group, the largest independent multi-specialty physician group in Illinois. The deal was valued at $1.45 billion. DuPage differs from Kelsey-Seybold because it continues to operate a fee-for-service based model of reimbursement.

For TPG, the investment follows its purchase of Convey Health Solutions from New Mountain Capital. The July transaction valued the healthcare payer services company at around $750 million, Buyouts reported.

In April, TPG contributed to a $235 million funding in AskBio, a gene-therapy company focused on rare and typically untreatable genetic diseases. In February, TPG partnered with Lani Fritts to launch Kadiant, a provider of autism-treatment services, committing $300 million of equity to the new platform.

TPG has invested more than $3.9 billion in healthcare over the last four years, sources told Buyouts earlier this month.