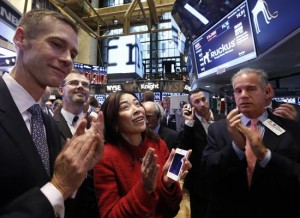 After a hurricane-induced market closure and subsequent market volatility, many companies that were slated to go IPO in October and early November opted to instead withdraw or postpone.

Nevertheless, a few are weathering the storm and entering the market anyway, including venture-backed Ruckus Wireless, a wireless systems supplier, which brazenly listed on the NYSE on Nov. 16. You can read more about how the venture-backed company did on its first day of trading by clicking here.

As Ruckus Wireless CEO Selina Lo tells VCJ contributor Katie Roof: “We ran into everything you could imagine. We delayed our roadshow for three days because of Sandy. And then, when we were in New York City, we ran into the snowstorm. All the flights were canceled. And then we had the election, followed by fiscal cliff concerns.”

To read more of Katie’s story on Ruckus Wireless, which is backed by Sequoia Capital and others, and to see an IPO Aftermarket Table of IPOs from the past year, VCJ subscribers can click here.

The IPO of Ruckus Wireless follows the public debut of Enanta Pharmaceuticals Inc., bringing to 47 the number of VC-backed IPOs to launch in the year, through mid-November. Unless there’s a surge in new offerings before the New Year, 2012 will have fewer VC-backed IPOs than last year, when 52 went out. That compares to 74 venture-backed IPOs in 2010.

Despite the market obstacles of the past month, the IPO future looks bright to many.

Mark Heesen, president of the National Venture Capital Association, tells Katie: “Venture capitalists are optimistic that if the overall economy can withstand what Washington policymakers decide to do with the fiscal cliff, the IPO window will open wider and many venture-backed companies can successfully move into the public market.”