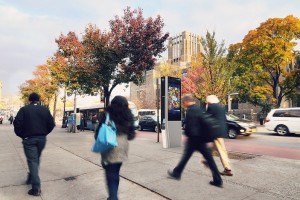 LinkNYC, a private equity-backed communications network that promises free Wi-Fi to New Yorkers, may finally unveil some of its kiosks this year.

LinkNYC is ripping out all the public phone booths in New York City and replacing them with kiosks — called Links — that will provide high-speed Internet, phone calls and device charging to anyone who wants it. The Links have a signal range of up to 150 feet, the LinkNYC website said. Over the next eight years, up to 10,000 Links will be installed across the five boroughs, a LinkNYC spokesman said.

The first boxes are expected to appear in NYC some time over the next few months, the spokesman said.

LinkNYC is attempting to bring fast wireless access to the segment of the population that still doesn’t go online. About 15 percent of U.S. adults do not use the Internet, Pew Research Center said in July citing an analysis of survey data. A 2013 Pew Research survey found cost was a barrier for some adults, 19 percent, who were offline.

LinkNYC is aiming to solve that problem. Each kiosk will have a touch screen tablet for Internet browsing, directions, phone calls as well as a 911 emergency call button. There will even be a USB outlet to charge devices. And it’s all free, according to Mike D’Amelio, the managing partner and founder of JMC Capital Partners, an investor in LinkNYC. “You will see the first Links in a very short term,” he said.

Each Link will feature advertising that is expected to pay for the kiosks and the network, D’Amelio said. In fact, the project is expected to generate more than $500 million in revenue for New York City over the next 12 years, the LinkNYC website said.

“This whole thing is done at zero cost to the taxpayer,” D’Amelio said.

Mark Boidman, a Peter J Solomon Company managing director within the firm’s media & technology group, said NYCLink will “change the face of consumer and retail in New York City.”  Users, he said, will be able to walk by a kiosk, see a video and download it instantly. “It’s the opportunity to take media content everywhere,” said Boidman, who made the comments at the Mergermarket Consumer M&A Forum on Oct. 13. “It’s game changing,” he added.

The project dates back to November 2014 when New York Mayor Bill DeBlasio announced CityBridge had won the mandate to develop LinkNYC, a communications network that would bring fast municipal Wi-Fi to New York City residents, businesses and visitors.

JMC, a PE firm focused on industrial technology, owns a minority stake in CityBridge, D’Amelio said. Other CityBridge investors include Qualcomm and Intersection. Sidewalk Labs, formed by Dan Doctoroff and Google in June, owns a small piece of Intersection (Doctoroff is the ex-CEO and President of Bloomberg LP and a former Oak Hill Capital Partners’ managing partner).

CIVIQ Smartscapes, a JMC Capital portfolio company, is also designing, making and supplying the hardware and hardware services for LinkNYC, D’Amelio said. “This is an extraordinarily exciting investment and we are thrilled to be partnered with the constituents at LinkNYC,” he said.

Executives for Google, Sidewalk Labs and Qualcomm could not immediately be reached for comment.