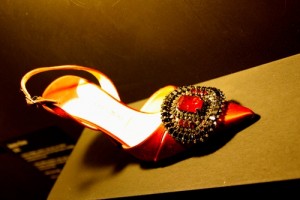 Luxury shoe maker Jimmy Choo (IPO-JIM.L) is on course to join London’s main stock market next week with a value of up to $1.1 billion, industry sources said, citing the initial price range quoted by banks arranging the sale.

The company, whose shoes are worn by celebrities across the globe and cost several hundred pounds a pair, is hoping to sidestep the turmoil that has hit some luxury brands following pro-democracy demonstrations in Hong Kong by pointing to its industry-beating sales growth and expansion plans in Asia.

But some investors remain to be convinced, expressing concerns about the comparatively high proportion of revenues it invests in capital spending, as well as its debt levels.

“Jimmy Choo is a great brand with good growth potential but it has a high capital expenditure ratio and usually we prefer fashion companies with stronger balance sheets,” said Andrea Gerst, who helps manage the Julius Baer Luxury Goods Fund with 330 million euros ($414 million) under management.

“Also, given it is a small company, their growth rates are not amazing, relatively speaking,” she said, adding her firm had not decided yet whether to buy Jimmy Choo shares.

Jimmy Choo started marketing to institutional investors in London on Monday and will then go on to Paris, Frankfurt and the United States, a source close to the matter told Reuters.

The share pricing is scheduled for Oct. 17 with trading expected to start on Oct. 20, the source added.

Books opened with an initial price range of 140-180 pence a share, which would mean an equity value for the company of 546-702 million pounds ($873 million-$1.12 billion), other industry sources said.

With a plan to list 25 percent of the company, the minimum required, that would put the offering size at 136-175 million pounds, before any over-allotment option is exercised, which could see further shares sold.

Founded in the 1990s by Malaysian bespoke shoe maker Jimmy Choo, the company went through several private equity owners before being bought for more than 500 million pounds in 2011 by JAB, the investment arm of Germany’s billionaire Reimann family.

Jimmy Choo, which shot to global prominence through the U.S. fictional television series Sex and the City, is coming to market at a difficult time for the luxury goods industry, with the Ukraine crisis hitting demand in Russia and the Hong Kong demonstrations adding to concerns about a slowdown in China.

Richemont warned last month of flagging Asian demand and analysts expect LVMH to publish lackluster third-quarter sales on Oct. 14, a few days before Jimmy Choo is due to be priced.

TRACK RECORD
Jimmy Choo hopes to woo investors with its potential in Asia, particularly in China where it has 11 shops and aims to open five a year to bring the total to about 30.
It believes it can continue to be perceived as a desirable, niche high-end shoe maker despite its expansion plans, even though demand for brands such as Louis Vuitton and Gucci has suffered because consumers started to regard them as ubiquitous.

Prada (1913.HK: Quote, Profile, Research, Stock Buzz) was one of the most active luxury brands opening shops last year and now some analysts fear it has become already a little over-stretched. Last month, it warned it would have no growth this year and its shares have lost more than 13 percent since early September.
Jimmy Choo, which recently opened a flagship store in London, had 120 directly operated shops as of the end of June and has said it plans to open 10-15 shops a year until 2016.

By comparison, Prada opened 47 shops in 2013 and the brand had 330 directly operated shops at the beginning of the year.

In the past two years, Jimmy Choo’s same-store sales have reached 6-7 percent growth, with strong demand in the United States and Japan. It made adjusted earnings before interest, tax, depreciation and amortization (EBITDA) of 46.9 million pounds on revenue of 281.5 million in 2013. In the first half of 2014, revenue reached 150.2 million and EBITDA 27.6 million.

The company said overall sales growth in the first half was 9.4 percent, with a like-for-like increase of 2.2 percent which was hit by store renovations and the roll-out of a new format.

Jimmy Choo has been investing around 8 percent of its sales in capital expenditure while the industry standard is around 5 percent and it has an estimated net debt to EBITDA ratio of more than 3.5 times for 2014 — which is significantly above big groups such as Kering and LVMH with ratios below 2 percent.

The company is estimated to have more than 100 million pounds of debt, one of the sources said.

But the brand will argue its future growth rates will likely remain above the industry as its compound annual growth rate (CAGR) for the past five years has been 10-12 percent. Its average annual sales growth has hovered around 15 percent in the past three years alone, the source added.