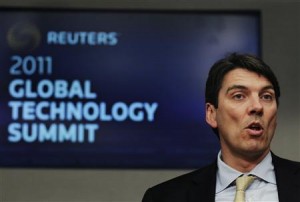 Yahoo CEO Marissa Mayer could do worse than looking to her former Google colleague Tim Armstrong for tips on how to run an ailing Internet giant.

Last fall, many were predicting Armstrong’s imminent demise as CEO of AOL. But the stock has more than tripled over the last 12 months. In fact, on Tuesday, after announcing a third-quarter profit, the company’s shares hit a 52-week high of $43.70. “I was dead wrong” about Armstrong, says economist Paul Kedrosky, who once forecast that Armstrong would be nudged out of AOL by early 2012 if he didn’t find buyers for AOL’s various assets.

The question now is how much Armstrong’s efforts matter given that the company’s core business of display advertising appears to be collapsing as a dominant strategy.

There’s no doubt that AOL’s rebound has been dramatic. Little more than a year ago, the company’s stock had tumbled to just north of $11 per share, as shareholders fretted over a litany of issues. Among them: AOL’s $350 million cash acquisition of Huffington Post wasn’t showing returns; the founder of TechCrunch, who sold to AOL and was later fired, began dragging the company through the mud; and Patch a collection of hundreds of local ad-supported online newspapers that target small communities, was costing unprofitable AOL $160 million annually.

Armstrong — a charismatic leader who formerly headed up U.S. sales for Google — has done much to assuage concerned investors since that time.

In addition to some operational restructuring, stock buybacks (AOL repurchased 300,000 shares in early August), reducing its number of outstanding shares, and smartly managing Wall Street’s expectations, the company agreed in April to sell roughly 800 patents to Microsoft for $1 billion, returning all of the proceeds to investors. AOL also slowed the slide in its legacy, dial-up subscription service (revenue is down 9.6 percent year-over-year, its lowest rate of decline since 2006); it pared down Patch; and it’s been increasingly focusing on growing search, Internet video, and its ad network business.

“In totality, it’s quite impressive,” says Lou Kerner, a former Internet analyst who today manages The Social Internet Fund, a New York-based company that invests in privately held social and mobile companies. “Could someone else have gotten as much money for the patents? Maybe. But what was recently considered an also-ran appears to be in the midst of turnaround, and it’s due to Tim and the talented team’s he’s recruited.”

Still, not everyone sees AOL as a potential growth story again, despite Armstrong’s accomplishments. The biggest reason: Most of AOL’s recent gains came not from its core business but rather tricks it’s been playing with search. While search revenue grew nearly 8 percent to $92 million through yield optimization and marketing campaigns, AOL’s U.S. ad revenue, which was flat in the second quarter, actually dropped in the third quarter. And with competition in the display ad business only growing more heated, Kedrosky doesn’t necessarily see that trend reversing. “Is there a business running ads against content? Sure,” he says. “It’s just a crappy business.”

Internet analyst Victor Anthony of Chicago-based Topeka Capital Markets is reserving judgment, too, saying he’s still “not convinced” that AOL can be turned around.

“I applaud what [Armstrong] has done to get the stock price back to where it probably should be, but [AOL’s] core business is still struggling,” says Anthony. “And if the product you offer is in secular decline, if its toward the end of it is product life cycle and it’s being disintermediated by technological change,” operating as independent company stops making sense after a point.

Indeed, says Anthony, while the industry may want to cheer on the long beleaguered company, to imagine a new day dawning for AOL, its momentum may instead make it easier for Armstrong to steer it to a desirable buyer within the next two years.

For someone in Mayer’s position, that could be a victory, too.