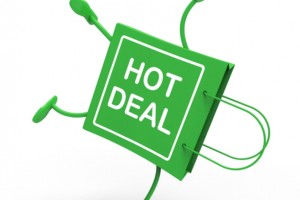 It is not your imagination. There have been a lot of secondary sales, where one private equity firm sells to another PE firm.

Despite their popularity, the number of global secondary sales has actually dropped this year. The deals are just bigger, according to data from Thomson Reuters.

There have been 78 global announced secondary transactions so far this year, collectively valued at $6.1 billion, Thomson Reuters said. This compares to 94 announced deals as of March 24, 2013 that totaled $6.2 billion.

The biggest secondary deal this year has been TPG’s $1.5 billion buy of The Warranty Group. Onex acquired the company in 2006, investing $498 million equity in the deal. Onex is making a 3.1x return on the deal, The New York Times said. Coming in second place by size was Permira’s agreement to sell Renaissance Learning to Hellman & Friedman for $1.1 billion. Permira stands to make about 4x invested capital on the sale.

And, Thoma Bravo is buying TravelClick for $930 million. Genstar Capital and Bain Capital Ventures, which acquired the company in late 2007, are expected to post a roughly 3.8x return, peHUB has reported.

The surge of secondary deals is generally a good thing for GPs but not necessarily so for LPs, said one banker. With so many sales back and forth between PE firms, LPs can get stuck in the same asset but at a higher price, the source said. “It’s musical chairs for LPs,” the banker said.

Sponsor-to-sponsor deals are approaching 50 percent of PE exits, the banker said. There are 7,500 private equity-owned companies in the United States, and half are held longer than six years, the source said. “This is the highest ever,” the source said, referring to the number of secondary transactions. “IPOs are relatively steady and strategic exits are declining.”

Two LPs tell peHUB that secondaries aren’t necessarily ALL evil. “It all depends upon what the next sponsor does with the asset,” the first LP said. Also, “the LP may not be in the same two funds,” eliminating the problem of an LP not ending its ownership of a company in a secondary sale.

The deals LPs should be worried about? “Peer-to-peer” secondary trades, the first LP said. In such cases a GP may have been the “wrong guy” owning the asset. Or the sponsor had a different philosophy about growth and capital spend than management did, the LP said. This often leads to a poor result for the first sponsor. On the other hand, a sale to a new sponsor, who may know the industry better or see different opportunities, actually helps the company, the first LP said.

The second LP said he was “gun shy” about secondaries and regarded them with cynicism. Still, some transactions can be a win-win for all parties, the source said. The second LP pointed to Marine Telecommunications Network, which has been traded three times. Falconhead Capital paid $30 million for the company in 2003 and then sold it two years later to Perseus. The investment generated a 5x return for Falconhead, according to a press report from that time.

Perseus a year later in 2006 sold Marine Telecommunications to Seamobile, which is backed by Ignition. Ken Socha, Perseus’s chairman and a senior MD, said the firm invested $35.8 million and realized $79.2 million from the sale of the company. Perseus made 2.2x its money for a 107.2 percent IRR, Socha said. “MTN was a good deal,” he said.