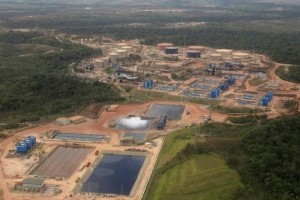 Pacific Exploration and Production Corp (PRE.TO) said it reached a deal with debt-holders, including Catalyst Capital Group, to convert almost all of its debt to equity as it looks to fight a prolonged slump in oil prices.

The deal comes after Pacific Exploration said last week that its board had agreed to negotiate a financial restructuring involving Catalyst, a Canadian private equity firm, after the oil and gas company missed an interest payment.

About US$5.3 billion of the company’s debt will be exchanged for 58.2 percent of its common shares under the restructuring deal, Pacific Exploration said.

Catalyst has agreed to provide half of the US$500 million in debtor-in-possession financing and will own a 29.3 percent stake in the restructured company, Pacific Exploration said.

The company, previously known as Pacific Rubiales Energy Corp, said its operations, along with those of its subsidiaries, would not be affected by the restructuring.

Separately, the Toronto Stock Exchange suspended the trading of the company’s shares, which were set to be canceled under Pacific Exploration’s restructuring plan.

The company’s shares have fallen 88 percent since last July when Mexico’s Alfa SAB de CV (ALFAA.MX) and energy investment firm Harbour Energy Ltd dropped their plans to buy the company for about $2 billion (US$1.57 billion).

The deal was opposed by O’Hara Administration Co, one of the company’s top shareholders.

Update: Pacific Exploration is a Toronto-based explorer and producer of natural gas and crude oil in Latin America.

(Reporting by Parikshit Mishra and Amrutha Gayathri in Bengaluru; Editing by Sunil Nair and Anil D’Silva)