Let’s face it, we in the private equity industry are performance junkies, and not just professionally but probably in our personal lives, too. But there’s good reason for this. Many studies show that we tend to move and improve what we measure. It’s in that spirit that we’re happy to share some key results and takeaways from the 7th annual SPS Deal Origination Benchmark Report.

The DOBR compares the market coverage of a PE firm — the percentage of relevant, completed PE transactions with a sell-side adviser that the firm reviewed — against all private equity firms as well as their peer group.

Median PE market coverage of relevant deals was 16.6 percent for the 12 months ended June 2017. The median improvement over the period was a mere 1.2 percentage points, but still an uptick.

When the seller was represented by a boutique adviser, defined as an intermediary who sold just one or two businesses to private equity firms in the past year, median coverage was 9.6 percent. This is no surprise: Based on the SPS Sell-Side Process Index, which classifies the type of marketing process that intermediaries employ (broad, moderate, or limited) on a relative basis, more than half of boutique advisers typically run limited processes.

Boutique advisers represent the greatest opportunity for PE firms to improve their market share of relevant deal flow and boost their fund returns. Limited processes enable buyers to get to know companies more closely. Furthermore, with less competition come lower purchase multiples, and in today’s frothy market, this edge can make the difference in advancing IRRs into top-quartile.

The primary reason for this was the growth in sample size, with 129 Sutton Place Strategies clients qualifying for this year’s report. The further refinement of categories enables PE firms to measure their performance against more targeted peer groups. Noteworthy is that each of the top PE performers in their respective peer groups had one or more dedicated business-development professionals, although less than half the firms in this year’s analysis actually have at least one dedicated business-development professional.

The 2017 DOBR report was more robust in several other ways:

— We expanded this year’s report to include coverage by geography as well as sector, which private equity firms can use to do a better job of reaching out to intermediaries by region and by industry.

— Finally, we included market coverage for Limited, Moderate, and Broad process deals, where the high mark for each category came in at 12.3 percent, 58.5 percent, and 60.6 percent, respectively. Understanding market coverage by deal-process type enables PE firms to determine whether they have share of mind among intermediaries when only a handful of buyers are invited into a process, versus seeing just the broadly auctioned opportunities.

In the same way that private equity firms consider tracking certain key performance indicators of their portfolio companies to be vital, when it comes to deal sourcing, there are certain metrics you just have to know.

You can have the best map in the world, but it would be a lot less useful without the red dot that tells you where you are. Knowing the numbers will enable you to arrive at your destination faster, at lower cost, and a whole lot happier. 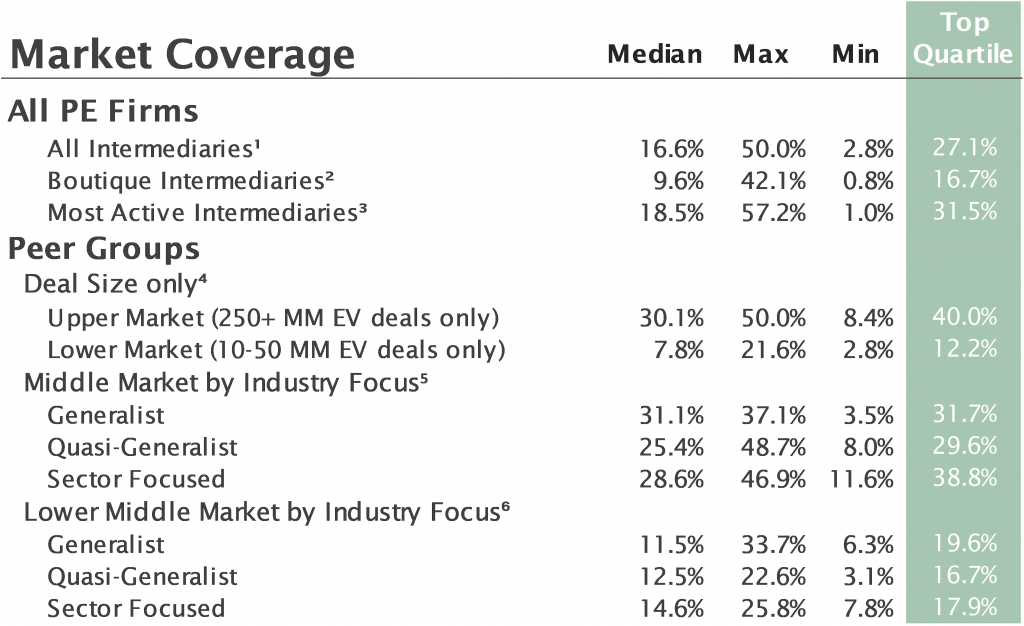 * As of June 2017, based on Sutton Place Strategies’ 129 clients that qualified for the annual Deal Origination Benchmark Report.

¹ Percentage of completed deals with a PE buyer and sell-side adviser in relevant size ranges and sectors, that were reviewed by a PE firm.

² Market coverage of transactions in a PE firm’s target market represented by sell-side advisers closing only 1-2 deals per year to a PE buyer.

³ Market coverage of transactions in a PE firm’s target market represented by sell-side advisers closing 3 or more deals per year to a PE buyer.

Author Nadim Malik is founder and CEO at Sutton Place Strategies LLC. Reach him at nmalik@suttonplacestrategies.com.