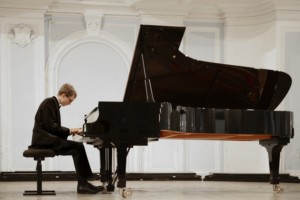 (Reuters) – Buyout firm Kohlberg & Co on Tuesday refused to match a $477 million offer for Steinway Musical Instruments Inc said to be from Paulson & Co, leaving the 160-year-old maker of pianos and saxophones free to finalize a deal with the hedge fund titan.

Steinway said on Monday it had received a $38 per bid from an unidentified asset manager that beat Kohlberg’s $35 per share offer. A person familiar with the matter identified the asset manager as the hedge fund firm of John Paulson.

Stock market investors were taken by surprise by Kohlberg’s response. Steinway shares, which traded as high as $39.84 on Monday on expectations of an even higher bid, fell to $38.33 on Tuesday, close to Paulson’s offer price.

A leveraged buyout of Steinway would represent an unusual private equity-style deal for hedge fund mogul Paulson, who shot to fame in 2007 with a prescient bet against subprime mortgages and repeated his success in 2009 with a bet on gold.

An American icon synonymous with handmade grand pianos, Steinway has struggled to keep its production margins competitive amid stagnant sales, prompting it to consider a sale.

Steinway said in a regulatory filing on Tuesday that Kohlberg waived its right to match or beat the rival offer. After clinching a $438 million buyout deal with Kohlberg in July, the Waltham, Massachusetts-based company launched a 45-day “go-shop” period that allowed it to solicit higher offer.

That deal came six months after Steinway, an American icon synonymous with handmade grand pianos, said it had decided not to sell itself following a 17-month-long exploration of strategic alternatives, including speaking to private equity.

An in-principle agreement to sell its band instrument division to an investor group led by two of its board members, Dana Messina and John Stoner, was scrapped last year in light of its operating performance, Steinway said at the time.

In July 2011, Messina, Stoner and other members of management made an offer for Steinway’s band instrument and online music divisions, prompting the company to set up a special committee to assess it.

By October 2011, Messina had stepped down as CEO of the company after 15 years at the helm to pursue his bid, yet he remained a board member. He was replaced by Michael Sweeney, a chairman of the board of Star Tribune Media Holdings and a former president of Starbucks Coffee Company (UK) Ltd.

In June, Steinway completed the sale of its leasehold interest in the company’s flagship Steinway Hall building, on Manhattan’s 57th Street, to a partnership led by JDS Development Group for $46.3 million in cash.

According to its website, Steinway & Sons, the company’s piano unit, opened the first Steinway Hall on 14th Street in Manhattan in 1866.

With a main auditorium of 2,000 seats, it became New York City’s artistic and cultural center, housing the New York Philharmonic until Carnegie Hall opened in 1891. These days, Steinway Hall is a showroom for the company’s instruments.

Steinway has said it will be able to remain in its present location in New York until the end of 2014 and that it has already begun the planning process for a new Steinway Hall.

Steinway’s pianos have been used by legendary artists such as Cole Porter and Sergei Rachmaninoff and by contemporary ones like Chinese concert pianist Lang Lang.