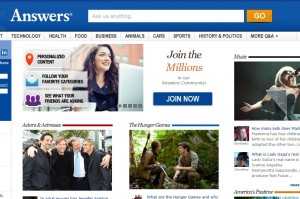 Summit Partners quietly sold a chunk of its stake in Answers just months after acquiring the company.

TA Associates is the buyer and is now the largest stakeholder, says David Karandish, co-founder and CEO of Answers. Karandish wouldn’t disclose how much TA paid for its stake, but says that the PE firm is a minority investor.

The transaction, announced Monday, closed in December, a spokeswoman says. It was not clear why Answers waited so long to announce the deal.

“We’re extremely excited to have TA as an investor and to have Summit continue on as investor,” Karandish says.

St. Louis-based Answers, which calls itself the “world’s leading Q&A resource,” was founded in 1998. The company competes against Quora, Yahoo! Answers and Ask.com and provides information on topics from Lady Gaga to how to break-in a new car. In April 2011, Summit Partners, a growth equity firm, took Answers private in a deal valued at $127 million. The sale was comprised of $100 million in loans and debt, according to SEC filings. Summit apparently injected about $27 million equity for a majority stake in Answers.

With the sale to TA, Summit will retain a minority, Karandish says. The transaction was not a formal process. TA approached Answers last summer, Karandish says. “We got an inbound approach,” he says. “It’s an interesting way to bring on a new investor.”

The goal of going private in 2011 was to “get under the hood and improve the user experience and add more social and personal features,” he says. Now, with its sale to TA, Answers may go public again, he says.

Answers revenue model is ad-supported. In the future, the company is looking to provide more revenue opportunities and partnerships. The company hopes to partner with companies to do sponsored Q&As, Karandish says. This can include insurance company answering questions about insurance or auto companies answering queries on cars.