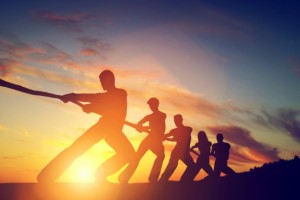 Three buyout funds are vying to buy General Electric’s (GE.N) banking unit in France as the U.S. conglomerate presses ahead with its plan to offload its financing operations in Europe, four sources familiar with the matter said.

Morgan Stanley and Rothschild are leading the sale which is in the final stages and could wrap up in the coming weeks, the sources said.

GE has so far inked $126 billion in deals — more than half of its overall target — since announcing in April it would seek to reduce its GE Capital finance business to less than 10 percent of earnings as it focuses more on manufacturing.

GE Capital accounted for 42 percent of the company’s profit in 2014.

In Europe, the U.S. conglomerate has sold businesses including its consumer credit business in Austria and Germany, GE Money Bank Nordics and floated its Swiss consumer lending business.

If it goes ahead, the sale of GE Money Bank in France would accelerate the dismantling of its European financing business which according to GE’s website runs assets worth more than $80 billion across 19 European countries and has in excess of five million customers.

The price for GE Money bank in France could not be determined. But GE’s Nordics business with assets of 2.3 billion euros sold to Spain’s Santander (SAN.MC) for 700 million euros in June 2014.

GE Money Bank, established in France in 1995 through the combination of French banks Crédit de l’Est and Banque SOVAC, had more than 750 employees in France at the end of last year.

A number of investment banks are running parallel processes to sell GE’s finance assets across Europe, the sources said.

Barclays (BARC.L) and JPMorgan (JPM.N) have been picked by GE Capital to sell its units in Britain, Germany and France in a bundled deal, the sources said.

This process, which was launched before the summer, has yet to gain momentum as bidders are wary of gaining exposure to more than one country, one of the sources said.

Reuters reported in May that Deutsche Bank was hired to sell Italian lender GE Capital Interbanca, which has a book value of around 1 billion euros.

But besides selling GE Money Bank in France, it is unlikely that other major European deals will come to fruition by the end of the year, one of the sources said.

In the United States, the only remaining significant GE Capital business is its franchise finance unit, which has about $5.5 billion worth of assets.