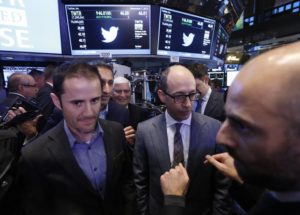 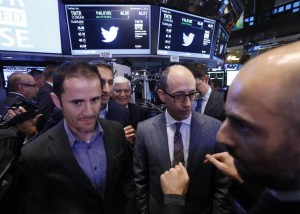 (Reuters) – Twitter Inc shares rose 73 percent in a frenzied trading debut that drove the seven-year-old company’s value to $25 billion and evoked the heady days of the dot-com bubble.

The stock closed its first trading day at $44.90 a share from the initial public offering price of $26 set late on Wednesday, falling back from a near-doubling in price at a session high of $50.

Investor enthusiasm for the microblogging company defied traditional valuation analyses. The shares traded at about 22 times forecast 2014 sales, nearly double the multiple at social media rivals Facebook Inc and LinkedIn Corp, even though Twitter is far from turning a profit and posted a loss of almost $70 million for its most recent quarter.

Yet fans believe that Twitter, which has 230 million users globally, has established itself as an indispensable Internet utility, alongside Google Inc and Facebook, and that it has only scratched the surface of its potential as a global advertising medium.

“When people use Twitter they are following certain people, they’re searching for specific information,” said Mark Mahaney, an analyst at RBC Capital Markets. “There are powerful marketing signals that are almost Google-esque, something that Facebook doesn’t really have.”

The IPO was shadowed for months by Facebook’s troubled 2012 debut, in which the shares quickly fell below their offering price amid trading glitches and subjected the company and its lead banker, Morgan Stanley, to accusations that they had been greedy in pricing the deal.

Twitter’s opening appeared to go off without a hitch, prompting Anthony Noto, the Goldman Sachs banker who led the IPO, to write a simple Tweet: “Phew.”

Still, Twitter may find itself subject to the opposite criticism, that it had priced the shares too low and left more than a billion dollars on the table.

“In my mind they certainly could’ve raised the price on this thing and gone into the low 30s,” said Ken Polcari, director of the NYSE floor division at O’Neil Securities. “From an outsider looking in I would say they were overly cautious because they didn’t want a disaster on their hands … I’m sure the company didn’t want a Facebook debacle, I get that, but I think they were overly cautious and it cost them some money.”

Heavy demand for the IPO shares was apparent before the final pricing. Market sources said investors had asked for 30 times the 70 million shares on offer in the IPO, representing about 13 percent of Twitter’s outstanding common shares.

Twitter could raise $2.1 billion if an underwriters’ over-allotment is exercised, as expected, making it the second largest Internet offering in the United States behind Facebook Inc’s $16 billion IPO last year and ahead of Google Inc’s 2004 IPO, according to Thomson Reuters data.

The NYSE, which snatched the listing away from its tech-focused rival, Nasdaq, marked the occasion with an enormous banner with Twitter’s bird logo along its Broad Street facade.

At current valuations, the stakes owned by Williams and Dorsey would be worth around $2.7 billion and $1.1 billion, respectively. Costolo, who invested $25,000 in the fledgling company in 2007, holds a 1.4 percent stake worth about $360 million.

They hefty valuations were cause for celebration for some insiders but they sounded alarm bells for some investors who cautioned that the froth was unwarranted.

“With a price that pushes into the high 30s and beyond, Twitter is simply too expensive,” Pivotal Research’s Brian Wieser wrote in a note cutting his rating on the stock to “sell” from “buy.” “One way to justify a $45 price in our model would involve presuming that Twitter could generate more than $6bn in annual revenue by 2018. However, we think that would seem overly optimistic.”

British actor Patrick Stewart, of Star Trek fame, rang the opening bell at Big Board together with 9-year-old Vivienne Harr, who started a charity to end childhood slavery using the microblogging site.

“I guess I represent the poster boy for Twitter,” Stewart said, adding that he had only been tweeting for about a year.

At Twitter’s headquarters in San Francisco, offices opened early and hundreds of employees flocked to the 9th floor cafeteria to watch the festivities on TV while eating “cronuts,” a croissant-donut hybrid, made by Twitter’s resident chef, Lance Holton.

The public debut is the latest milestone for a service that was born out of a nearly-defunct startup in 2006 and was derided by many in its early years as a silly fad dominated by people talking about what they had for breakfast.

But Twitter quickly began to penetrate popular culture in unexpected ways, with its open design and broadcasting format attracting celebrities, athletes, politicians and anybody who wanted to share short, punchy thoughts with a digital audience.

Its business potential developed more slowly, and the company appeared to be floundering as recently as three years ago, when it was riven by management turmoil and frequently crippled by service outages.

Under Costolo, who took over as CEO in October 2010, the company has rapidly ramped up its money-making engine by selling “promoted tweets,” messages from marketers that are distribute to a wide-ranging but targeted group of users. In the third quarter, Twitter made $168 million in revenue, it said, more than double from a year prior.

The company said in its investor prospectus that more than three-quarters of its users are outside the United States. Despite its early reputation as a hangout for Silicon Valley early adopters and tech geeks, some of its most active markets now include Japan, Indonesia, Brazil and Saudi Arabia.

“Twitter has, when coupled with the increasing distribution of smart phones and reach of the Internet, an impact on global connectivity and transparency,” said P.J. Crowley, the former U.S. State Department spokesman. “It has definitely contributed to the acceleration of the news process and helped to expand the availability of information sources to a wide range of people.”

The 140-character messages have spawned an Internet culture of its own. The “hashtag,” a pound symbol devised by early Twitter users to denote the topic of a conversation, has became ubiquitous, with the word even becoming an ironic expression parodied by the likes of “Saturday Night Live.”

As Twitter’s stock soared after the opening, the company’s market value, including restricted share units and other securities that could be exercised in the coming months, was over $28 billion.

Fund managers who got small allocations at the IPO were hopeful the stock would trade down after Thursday’s pop.

“We have a target of $40 and we won’t buy more as long as it is trading above that,” said Mark Hawtin, portfolio manager of the GAM Star Technology Strategy.

Jerry Jordan, manager of the $48.6 million Jordan Opportunity Fund, who got a small allocation, said he would buy more of Twitter if it trades down around $30-$35.

“A lot of these sexy IPOs have a big pop on the first day and then they grind sideways,” Jordan said.

Twitter’s successful debut is likely to stoke interest in other up-and-coming consumer Internet companies such as Uber, Pinterest, Airbnb and Square, all of which boast private-market valuations well north of a billion dollars and could go public in the coming years.

Still, two early social media success stories, Groupon Inc and Zynga Inc, have suffered major reversals since going public last year. Groupon, despite big gains in its shares this year, still trades at less than half its 2011 IPO price. Zynga is worth about a third of its 2012 IPO price.

And first-generation social media firms such as MySpace have all but vanished as fickle users moved on to the next big thing.