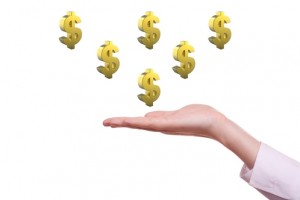 Booz Allen Hamilton made it official this week.

The government consulting firm will be paying out a special dividend of $1 billion to shareholders later this month. In July, Booz Allen said it was considering restructuring $959 million in debt into a new credit facility of up to $1.75 billion. Proceeds of the loan, along with $260 million in cash, would be used to pay the mammoth dividend.

Booz Allen’s board authorized the distribution on July 30. Ralph Shrader, Booz Allen’s Chairman, CEO and President, said the special dividend was a “prudent use of capital,” according to a statement.

With the $1 billion payout, the Carlyle Group emerges as the big winner. The Washington, D.C.-based buyout shop acquired a majority stake in Booz Allen in 2008 for $2.54 billion, Reuters has reported. Carlyle invested about $956.5 million in the deal, according to SEC filings.

Carlyle has received two other dividends from Booz Allen. In July 2009, Booz shareholders received a $114.9 million payout; $104 million went to Carlyle, according to regulatory filings. The buyout shop got another $444.1 million dividend in December 2009, regulatory filings say. Booz Allen went public in November 2010.

Carlyle currently owns about 74% of Booz Allen’s publicly traded stock and about two-thirds of total voting equity, a company spokesman says. With the $1 billion dividend and the two payouts in 2009, Carlyle will likely more than make back its investment.

Separately, West Corp., which is backed by Thomas H. Lee and the Quadrangle Group, is also paying out a sizeable distribution.

Omaha-based West Corp. said Wednesday that it is raising about $250 million via a senior notes offering. The company is also launching a $720 million refinancing loan. Proceeds from both transactions will be used to refinance about $448 million in loans and pay a $500 million dividend to West shareholders.

West Corp. provides conferencing services and other communications technology and services to a variety of clients, including hospitals, public safety organizations and corporations. In 2006, Thomas H. Lee and Quadrangle acquired West Corp. in a deal valued at $4.1 billion. Thomas H. Lee and Quadrangle invested up to $762.4 million in cash in the deal, according to SEC filings from that time.

In 2009, West Corp. filed to go public and the IPO is still on filing with the SEC. Thomas H. Lee owns 57.6% of West while Quadrangle owns 12%, according to a May regulatory filing.

The dividend is new for West. The company has not paid any other dividends since going private, a company spokesman says.