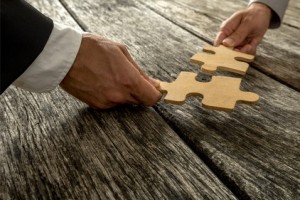 Deal-makers celebrating a record year for mergers and acquisitions (M&A) that was bolstered by mega deals are pinning their hopes on a larger number of smaller deals to fuel consolidation in 2016.

While the number of announced deals globally declined from 2014 by 2.1 percent to 39,687, deal volume rose 40.8 percent to a record US$4.6 trillion, according to preliminary Thomson Reuters data, as big companies pursued their dream matches.

Most of the obvious mega deals have been explored already, investment bankers and lawyers said. But the number of transactions could increase next year as newly merged companies sell non-core assets and smaller companies consider tie-ups to stay competitive, they noted.

“While the absolute dollar value of deals could very well decline in 2016, we expect the number of deals to increase year-on-year as the market broadens and we see more mid-sized transactions,” said Gary Posternack, global head of M&A at Barclays Plc.

The number of deals in 2015 that exceeded US$30 billion in value was 18; together, they made up a quarter of the year’s total volume. This compares with seven deals worth more than US$30 billion in 2014, and one in 2013.

Financial engineering was a major factor in some deals. These included drug maker Pfizer Inc‘s US$160 billion acquisition of Allergan Plc, a so-called inversion that would allow Pfizer to lower its tax bill by re-domiciling from the United States to Ireland.

The US$120 billion merger of chemical conglomerates Dow Chemical Co and DuPont was structured so that the subsequent spin-offs of the combined companies’ divisions would be tax-free.

Other drivers included acquirers’ need for speedier growth, as well as their strong balance sheet and confidence that the macro-economic environment was stable enough for them to splash out on big transactions.

“With economic growth still lagging, investors have been supportive of deals that make strategic sense and create value. The strategic rationale for M&A is more important than the price paid for it,” Goldman Sachs Group Inc global M&A co-head Gilberto Pozzi said.

The median value of deals globally as a multiple of the target’s annual earnings before interest, tax, depreciation and amortization rose to 10.6 times in 2015, the highest since 2007, before a buyout boom ended with the global financial crisis.

Combined with record deal volumes, this has raised concerns over whether the M&A cycle may be approaching its peak.

But “this is not an M&A bubble,” said Luigi Rizzo, M&A head for Europe, the Middle East and Africa at Bank of America Corp. “The record value of deals this year was underpinned by the low cost of capital and the strength of the dollar.”

A major difference from 2007 has been the absence of big leveraged buyouts. Private equity firms have mostly been sitting on the sidelines, preferring to sell companies to other strategic buyers, rather than trying to outbid them in auctions. A choppy junk debt market in the last few weeks has made it even more difficult for buyout firms to be competitive.

In the United States, M&A has totaled US$2.32 trillion so far in 2015, up 64 percent from the year-ago period. The United States accounted for 51 percent of worldwide deals, up from 43 percent a year ago.

“M&A volumes relative to gross domestic product are just pushing average levels; we are not at the peak yet. The average M&A cycle lasts four to five years, and we are only now close to the third year,” said Robin Rankin, co-head of global M&A at Credit Suisse Group AG.

“Europe is at least two years behind the U.S. in the M&A cycle,” Rizzo of Bank of America said. “But going forward it will be the main story as telecoms and other key industries are set to consolidate.”

“One thing that we may see is more confidence in the boardroom of targets to resist hostile approaches until the end; in other words, an increase in the number of ‘hostile hostiles’ that never turn friendly,” said Igor Kirman, a partner at law firm Wachtell, Lipton, Rosen & Katz who represented Perrigo in its defense against Mylan.

“The Perrigo defense against Mylan, the largest hostile deal ever to go the full distance, shows that a target can pursue a sound defensive strategy, even in the absence of showstopper defenses or litigation, and win,” Kirman added.

The M&A market could slacken in 2016 if the economy and political environment turn sour. For example, deal-makers have been speculating about whether a big rise interest rates could dampen deal-making.

“I don’t think interest rates alone will make a big difference in M&A; however, uncertainty in the financing markets and global political climate could be more of a concern than anything else,” said Eileen Nugent, global co-head of law firm Skadden, Arps, Slate, Meagher & Flom‘s transactions practices.

“But all of the traditional factors for a robust M&A market are still there and confidence is strong.”

(Reporting by Greg Roumeliotis in New York and Pamela Barbaglia in London; Editing by Richard Chang)