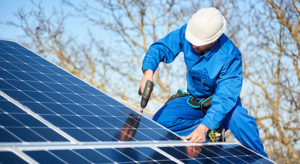 Community solar projects have become an attractive way to offer renewable energy to both commercial and residential users, satisfying the investment appetite for large PE firms such as Apollo Global Management, which made a $175 million strategic investment in Summit Ridge Energy last week.

Community solar projects are largely designed for energy consumers who do not have the capacity to own an individual solar supply for various reasons. Customers can subscribe to a solar asset in a community from where they an buy renewable energy at a discount.

PE Hub caught up with Apollo partner Corinne Still to understand more about why this is the right time for the firm to invest in this space. She, along with Wilson Handler, another partner at Apollo, will be joining the Summit Ridge board.

“We have been tracking the community solar space for quite some time,” Still said. “The sector has really evolved and matured as more states have adopted programs and utilities and other stakeholders have embraced community solar as an attractive way to offer renewable energy to both commercial and residential users.”

Summit Ridge, headquartered in Arlington, Virginia, has been a key player in championing these community solar projects. The company expects to have more than 500 MW of solar and 100 MWh of battery storage projects online by next year, thereby providing energy savings to approximately 175,000 residential and commercial customers.

This, she said, is among the factors that excited Apollo to make the investment.

Community solar projects expand access to renewable energy for a much broader group of constituents than residential solar would on its own, Still said, adding that the sector has also benefited from the reduction in capital costs that have occurred across the solar industry over the last few years.

“We think that there is an abundance of organic growth within this market and for this company,” she said. Still described Apollo as a large institutional investor that has deep experience in scaling extremely large, midsize and small businesses.

The PE firm has invested in numerous renewable energy projects, among them solar, wind, battery storage and liquified natural gas.

“We can provide a lot of that expertise and those growth resources,” she said about this deal, adding that Apollo will help Summit Ridge penetrate new markets.

On how communities stand to benefit, outside discounted electricity, Still said there is potential for job creation in multiple ways.

“On the whole, we think it’s really a positive story,” she said. “In a way, it’s very similar with farm to table, it’s like solar power to table. It’s all within the ecosystem of a given state.”

Renewable energy has been on a growth trajectory in the country especially as the government seeks to retire the use of fossil fuels due in part to concerns over carbon emissions.

“We think the net outcome is that the buyers of the electricity save money on their electricity bills, and states see economic job growth by virtue of these assets getting built and serviced, and then the overall access to renewables expands,” she said.

However, the growth of solar energy was recently affected by the widespread supply chain problems that slowed the movement of equipment necessary to bring some solar energy projects online. According to Still, there are signs of improvement in this regard. “Supply chains are already starting to loosen up, equipment is coming in, and assets are getting back on schedule,” she said.

Another concern has been on the effect of the tight energy supply, that might slow the consumption of renewable energy.  “With that said,” Still noted, “I think maybe it’s [tight energy supply] more of a short-term issue, and on the longer term we are still on the trajectory of decarbonization.”