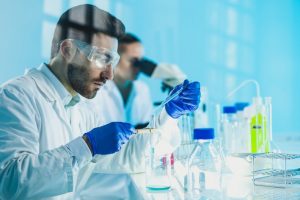 Already an experienced investor in both outsourced pharma services and procurement processes, Avista Capital Partners through eMolecules is now looking to tackle the needs of scientists working in the early stages of drug discovery research.

“eMolecules occupies a pretty unique position within the marketplace,” Sriram Venkataraman, partner at New York’s Avista, told PE Hub in an interview. “This is at the very front-end of drug discovery, which is the largest portion of spend. Scientists have to synthesize compounds, and you can either start with a commodity chemical or an advanced intermediate closer to the target compound.”

Based in San Diego, eMolecules is a tech-enabled provider of hard-to-find research and development chemicals and biologics. The company through its e-procurement platform connects biotech and pharma scientists with sophisticated reagents not offered by the usual commodity suppliers – enabling a quicker pace of early-stage drug development.

For Avista, eMolecules is set to mark the fifth platform investment to close out of Fund V, its second healthcare-exclusive vehicle. The fund closed in late February at $1.2 billion, exceeding its target by 55 percent after benefiting from “substantial excess demand,” affiliate title Buyouts reported. Accounting for eMolecules and its pending investment in French drugmaker Cooper, which it is buying alongside CVC Capital Partners, the fund will be 50 percent deployed, Avista said.

Avista, prior to its fund closure in February, sold a minority interest to Capital Constellation, an institutional joint venture advised by Wafra Group, Buyouts reported.

The firm declined to comment on financials, but noted that eMolecules’ investment size is consistent with its average hold of $125 million or more with co-investors. The total enterprise value falls below its typical $400 million-$800 million range.

In this case, Avista found the depth of eMolecules’ existing relationships across the discovery and purchasing organizations remarkable, Venkataraman said: “We were really impressed by the fact that [eMolecules] has 14 of the top 15 biopharma companies globally that are customers. The penetration within these accounts is very modest; they are scratching the surface.”

With Avista’s increasing focus around healthcare IT broadly, eMolecules was that much more attractive: “The tech-enabled nature vs just ordering off a catalog is quite meaningful.”

The company overall serves nearly 1,000 customers around the world, with more than 120 million SKUs [stock keeping units] that are sourced from more than 300 suppliers across 35 countries.

It was through Avista’s prior ownership of VWR that it began tracking the progress of eMolecules, as the lab-products distributor’s executives knew and spoke highly of the company, the investor said. Former VWR CEO Manuel Brocke-Benz now serves on the board of eMolecules.

Avista also became knowledgeable around the procurement aspect through VWR, which it took public alongside majority owner Madison Dearborn Partners in 2017.

For Avista, eMolecules looks to be right in its wheelhouse. The firm has deep investment experience in outsourcing both pharma and med devices, whether in contract manufacturing, contract development or contract research. Past investments include Charles River, ConvaTec, INC Research, MPI Research and BioReliance, while existing outsourcing portfolio companies include GCM and United BioSource Corporation.