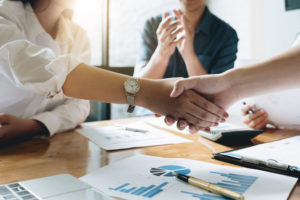 Mergers and acquisitions strengthen the American economy by way of providing liquidity, but dealmaking will be muted until the election, according to financial experts.

“You need time to go by so boards can be more comfortable with doing a deal,” said David A. Katz, partner at the law firm, Wachtell, Lipton, Rosen & Katz. “It’s the rear-view mirror effect.”

Katz’s comments were made during a virtual webinar looking at the post-pandemic deal universe. The video-based panel was conducted by Reuters Breakingviews on Wednesday.

In the absence of covid-19, investors would be wrapping up deals before the election. But dealmakers today are busy cleaning up their own issues with capital, the three panelists agreed.

“If people can get back to office after Labor Day, I don’t think we’ll see a big change in dealmaking,” said Katz.

Still, a second wave of coronavirus would be a game-changer. And Katz admitted the timeline will shift should that be the case.

In large part, the certainty of a deal close depends on investors and businesses – or buyers and sellers – agreeing on expected losses amid coronavirus.

In 2009, said Katz, many deals were called off due to a Material Adverse Effect (MAE). Under an MAE, an investor may break a deal agreement if it successfully proves an event or condition has or will have a material adverse effect on the business, financial condition or results of operations of the company between signing and closing.

“When parties are forced to negotiate on the objective factors such as future revenue that’s when we see the deal fall apart,” added Katz.

In the current crisis, private equity firms are already showing a greater willingness to go to court in an effort to scrap deals. For example, Forescout Technologies plans to take Advent International to court for refusing to close the parties’ $1.9 billion pending transaction under claims of an MAE. Elsewhere, Carlyle Group and Singapore sovereign wealth fund GIC may be able to walk away from an agreed deal with American Express GBT because of what is essentially a logistical issue. That would mean the parties aren’t even given the chance to argue the MAE.

But according to Leon Kalvaria, chairman at Institutional Clients Group, Citigroup, dealmaking will kick back up in about nine months: “There’ll be transactions and most of it will occur on a national basis.”

In other words, most activity will be restricted to North America versus cross-border M&A. Likewise, Chinese companies are unlikely to find a place in US investors’ deal pipelines.

“Outbound M&A from China is going to be muted whether it’s for nationalistic or security reasons,” said Kalvaria.

Given the vulnerabilities exposed by covid-19, some manufacturing is bound to come back to America, said panelists.

“What we are going to find here is that people are going to focus on supply chain,” said Kalvaira. The need for local sourcing and safety are driving this shift, he said.

Further, the China issue will affect portfolio companies with existing dependency on the region. Companies that spent time planning growth in China will remodel, said Katz, but changing the supply chain will not be so straightforward.

Katz said there’s a good likelihood that auto factories see a resurgence in the states. But the expert remained skeptical about medical mask manufacturing going local. “That’s going to be hard to come back,” he added.

Until portfolio companies transform their supply chains, providers and suppliers will continue to be flexible and work together in order to meet long-term demand, according to Kristin DeClark, managing director, co-head US equity capital markets, Barclays.

China will be out of a fund’s strategy, but South-East Asia will not. The lower labor cost will attract M&A activity but that itself won’t be enough, according to panelists. “ESG might be the hinderance,” said Katz. “It should not just be cheap labor, but do something else like increase medical [access], housing.”

“Employee focus will be critical,” Kalvaira said. “People now care about responsible capitalism and that means looking after your people.”

“The biggest source of capital is people putting money for retirement,” Katz said, “and they will want responsible capital growth.”